The Enchantress
The Warlock

Survive to see the Town lose the game.

The Witch is one of the evil roles from the mystery RPG game Town of Salem. The Witch wants to see the Town's defeat.

Also, the Witch has a basic defense barrier that protect them from the basic attacks.

The Witch can not attack people directly, but can control killing roles and make them kill their target.

The Witch must eliminate the Town. They can be team with every role except the Town roles.

For one time, the Witch can be protected from the basic attacks with their basic defense barrier. After they use the barrier, they won't have any defense. 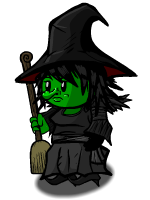 Avatar of the Witch.
Add a photo to this gallery

Retrieved from "https://villains.fandom.com/wiki/Witch_(Town_of_Salem)?oldid=3765523"
Community content is available under CC-BY-SA unless otherwise noted.