The Witch Doctor is the main antagonist of the Scooby-Doo! Where Are You? episode "A Tiki Scare Is No Fair".

Scoody-Doo! Where Are You?

The Witch Doctor is the third boss of the Nintendo 64 version of Scooby-Doo! Classic Creep Capers (after The Black Knight and the Snow Ghost) which is a re-telling of his episode.

He appears in Night of 100 Frights as one of the monsters brought back by the Mastermind.

The costume was put on display at the Coolsonian Criminology Museum. It was stolen, but not brought to life by the Evil Masked Figure.

He made a brief cameo at the end of Scooby-Doo! Curse of The Lake Monster. 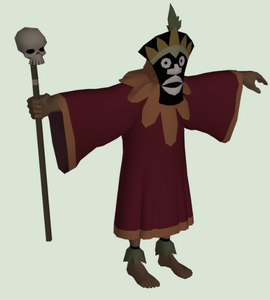 Retrieved from "https://villains.fandom.com/wiki/Witch_Doctor_(Scooby-Doo)?oldid=3254533"
Community content is available under CC-BY-SA unless otherwise noted.