To scare everyone away from her castle (succeeded for years, stopped by Mystery Inc.).

900 years ago, Lady Arzani had Keystone Castle built, but her evil brother took over and had her thrown into the dungeon, so she never got to live in it. While she was in the dungeon, she practiced black magic, so she could return in the afterlife and seek revenge. After her death, her spirit now known as The Witch Queen haunted all the von Richenstoof men in order to scare them away and get her castle back. When scaring them didn't work, she got rid of them one by one, in the form of horrible accidents.

In the present, the next Baron von Richenstoof was getting ready to host an International Food Festival at Keystone Castle when Lady Arzani's spirit showed up in his room. Later that day, she apparently showed up in a blast of fire during the festival and scared everyone away.

While being lead to the Baron by Costington, a very human-looking Lady Arzani will come through a set of doors and ask for Costington to fluff her slippers. Fred and Velma talk to her and she introduces herself as Lady Arzani and sheds some light on the von Richenstoof curse.

Upon entering Arzani's chamber, she will snap her fingers and make parts of the castle collapse as well as grow in size. Here, you just defeat the four werewolves that she summoned.

Once the werewolves are defeated, she will shrink back down and equip herself with a flail. All you really have to do is sit behind the column and wait for her flail to break them. After all four columns are broken The Witch Queen will be hit with falling debris and heal herself.

Now you can attack her directly, but she will teleport all over the place and shoot fireballs. Avoid her attacks and pummel her until she falls and gets hit by more debris. Keystone Castle then collapses and everyone runs to the exit. Once outside, the Baron thanks you for getting rid of the curse. The gang then explains to the Baron that his sister, Lady Arzani was using The Witch Queen as a way to scare him away so she could claim the gold under the castle. However, the Baron is quick to let them know that he doesn't have a sister, implying that Lady Arzani really was a ghost. Afterwards, The Witch Queen can be seen flying away from the castle ruins. 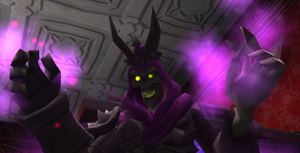 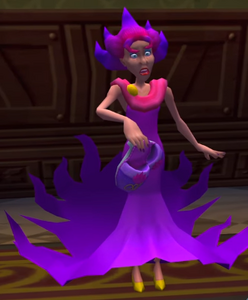 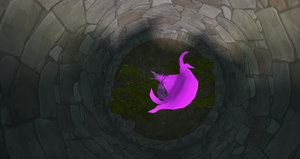 Lady Arzani in the dungeon. 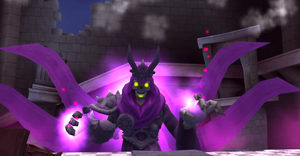 The Witch Queen growing in size. 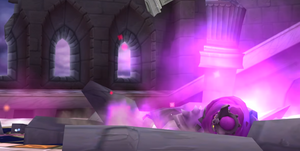 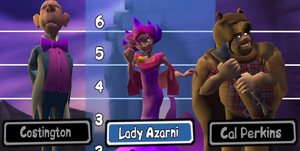 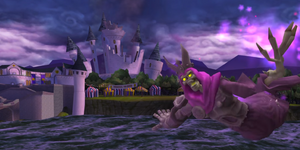 The Witch Queen flying away in the end. 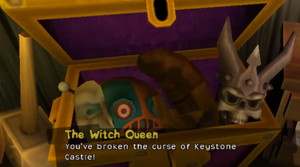 The Witch Queen's head next to the other boss trophies. 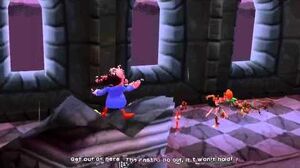 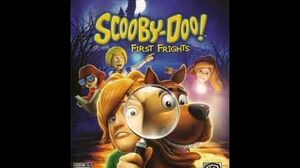