Supreme ruler of all witches in history

One of the 6 Witch Lords (formerly)

Killing humans.
Casting curses and diseases upon her victims.
Plaguing the minds of her victims.

To kill Kaulder after he outlived her usefulness as containment vessel of her immortality (partially succeeded and yet failed).

To bring about the next Black Plague and finally eradicate the human race in order to rule the Earth and all magic-conjurers under her reign (failed).

The Witch Queen (sometimes spelled "Witch-Queen") is the main antagonist of the 2015 supernatural action film The Last Witch Hunter. She was the absolute ruler of all witches who cursed the warrior Kaulder with immortality before seemingly being defeated at his hands.

She was portrayed by Julie Engelbrecht.

Prior to the main events of The Last Witch Hunter, the Witch Queen released the Black Death (also known as the Black Plague) onto England and soon half of the entire continent of Europe in the hopes of wiping out humanity and ruling Earth. Kaulder, and his team of witch hunters who are the early founders of the Axe and Cross Order, tracked the queen to her lair within a giant tree known as the Plague Tree, and they tried to kill her. She ambushes them, and she takes Kaulder to the tree's center. With his mighty iron sword known as Hexenbane (also called "Witch-Slayer") in hand, Kaulder stabs the queen with it; however, the Witch Queen retaliates by shoving her hand into his chest, and she curses him with eternal life. Unbeknownst to Kaulder at the time, the other witch hunters including the first Dolan found the Witch Queen's beating heart, and they secretly preserved it. Kaulder later went to work for the Axe and Cross, the same organization that was intent on maintaining a truce that was made between humans and witches. Kaulder was to be assisted by a priest that was known as a Dolan.

800 years later, the 36th Dolan was going to retire from the Axe and Cross, but he was found in a comatose state. It was suspected that a shape-shifter by the name of Ellic who attacked Kaulder, was the one who cursed him, and that this was a part of a bigger conspiracy that aspired to resurrect the Witch Queen. Belial (originally known as Baltasar Ketola), a male rebel witch who longed for the days of the Witch Queen, set about trying to retrieve the Queen's heart. He was actually the one who tortured and cursed the 36th Dolan, and he later used Max Schlesinger, a blind merchant and former warlock, as a sacrifice to the Queen during her resurrection ritual. The Queen is revived, and immediately strips Kaulder of his immortality, revealing that she had cursed him in order to allow herself to return. She then sets off to restart another plague curse and bring about the next Black Plague.

After she attacked and murdered both the Axe + Cross order and the Witch Council, the Witch Queen proceeded to collectively control the minds of the trapped witches in the infamous Witch Prison beneath St. Chrysostom’s Church, the Axe and Cross' very own headquarters in New York City, as part of The Chant, an ancient psychic form of magic used on the captured witches' minds as a chain. During the Chant, she also created a new Plague Tree in order to unleash the Black Plague. However, one of the witches, Ellic, is killed by the dreamwalker Chloe, severing the Chant. Kaulder arrives and engages the Queen in a battle, ultimately managing to overpower her. However, he is betrayed by the 37th Dolan, in retribution for Kaulder killing his parents years ago who were actually witches but he was born without magic. The 37th Dolan than proceeds to quickly aim at Kaulder and shot him, before the Queen herself rises and turns her attention to Chloe, placing her hands on the young dreamwalker's head and using her to continue the Chant. The Chant causes black swarms of Plague Flies to be released over the city. The 37th Dolan pleads for the Witch Queen to bestow upon him magic, but she declares that he is only a human before killing him.

Kaulder is reinvigorated by a vision of his wife Helena and their daughter Elizabeth telling him to get up and fight, and he reengages the Queen in battle with the aid of weather runes he confiscated from a forgiven teenage witch named Bronwyn during their flight to New York. Despite the Queen taunting him about his meaningless existence and his purpose to protect the feeble humankind, Kaulder manages to throw his sword Hexenbane into her chest, destroying her body and resulting in the Chant being severed, killing the swarm of Plague Flies and ending the new Black Plague.

Just as Chloe recovers from the Queen's influence, Kaulder discovers the Queen's beating heart and prepares to destroy it, killing both of them. Before he could destroyed it, Chloe begs him to stop, telling him of other dark forces that were awaiting his destruction so they could reawaken. Kaulder, convinced that he is still needed, resolves to seal away the Witch Queen's heart.

From the conversation between Kaulder and 36th Dolan, it was stated that with the Axe and Cross as well as the 1st Dolan's selfish decision to keep the truth of his immortality's nature as well as confining the Queen's heart by themselves resulting the disaster that just happened, Kaulder has stated that he both has kept the heart by himself, which is safer than on their hands.

As the absolute ruler of the witches, the Witch Queen was immensely powerful in magic and highly skilled in casting curses upon her victims. Her primary means of killing her enemies was to inflict them with the Black Plague in the form of thousands of Plague Flies. She also shows an ability to disperse into swarms of Plague Flies as a means of teleportation. She is also extremely skilled in elemental magic (which includes pyromancy and geomancy), as well as harnessing the power of darkness, 2 traits shared by Belial, one of her followers in the modern day world, except she demonstrates more of this dangerous power to control earth and shadows by summoning decaying tree roots emerging out of the pool of darkness on the ground beneath her and raised them as these roots shape into tentacles and screeching serpentine leeches.

The Witch Queen herself possesses the power to psychically link the minds of witches, willing or not, to The Chant. The Witch Queen has the ability to cast illusions to distract her enemies, showing Kaulder images of his deceased daughter Elizabeth to taunt him. In spite of her power, even the Witch Queen was not powerful enough to unleash the Plague on her own, needing the linked power of the other witches to accomplish this.

The Witch Queen was also skilled in hand-to-hand combat, dueling Kaulder at one point and nearly overpowering him. She was very agile and fast, managing to dodge most of his blows. 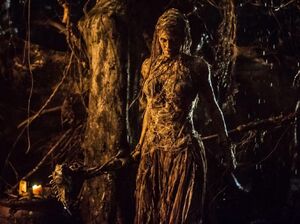 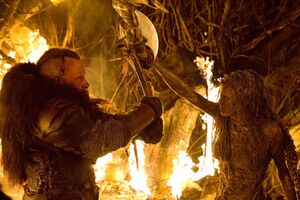 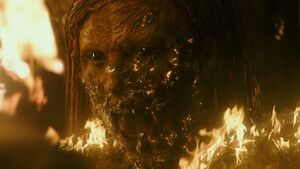 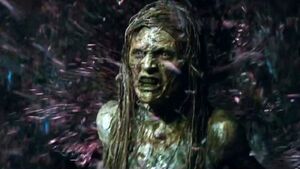 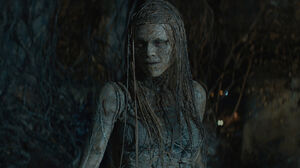 The Witch Queen beneath St. Chrysostom's Church.
Add a photo to this gallery

Retrieved from "https://villains.fandom.com/wiki/Witch_Queen_(The_Last_Witch_Hunter)?oldid=4032636"
Community content is available under CC-BY-SA unless otherwise noted.