The Witch of 116 Items is a one-time villain from the 2016 reboot of the Cartoon Network animated series The Powerpuff Girls, only appearing in the episode "Checkin' Out". She is a figment of Blossom's imagination, based off of a woman in the express aisle of the grocery store, who has more items than the required limit.

Blossom went to the express lane at the grocery store, which allowed customers to check out up to 115 items or less. Blossom noticed that the woman at the front of the line had 116 items, which she got really steamed about.

Blossom started having a medieval themed imagination sequence, where she pictured the woman in front of her as an evil witch, known as The Witch of 116 Items, who was sitting atop her towering throne of items and blocking of peasants (other shoppers, including Blossom) from entering the castle (the checkout). Blossom envisioned herself as a knight, riding on a valiant steed, who would step in and fight The Witch of 116 Items and save the belated kingdom.

Blossom faced off against The Witch of 116 Items and the latter used her magical powers to lift her many items and hurl them toward Blossom. Blossom used her sword to attack the items. Since these were all food items, Blossom ended up making sandwiches and other fancy cuisines after destroying them.

However, this entire sequence was all just happening in Blossom's imagination and in real life, Blossom was just beating up an innocent old lady, which got her kicked out of the store. 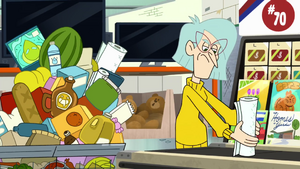