Witch of the Waste

Keeping her beauty via her spells.

The Witch of the Waste is a major antagonist in the book and the (former) secondary antagonist of the 2004 Japanese animated film Howl's Moving Castle.

She was voiced by Akihiro Miwa in the Japanese version, and by the late Lauren Bacall in the English dubbed version.

She was originally an apprentice to Sulliman until she fell to a demon of greed. She was banished by Sulliman, and went to live in the waste. Howl once thought she was beautiful and pursued her but after learning she merely used magic to make herself look young, he ran off but the Witch of the Waste became obsessed with him and tried to obtain his heart, hoping it would make him love her, and she is the person responsible for turning Sophie into an old lady.

As she leaves the hatter, the name of the shop, she tells Sophie that she can't tell anyone about the curse. The Witch of the Waste gets a letter to the castle, and she comes back after 50 years. She sees Sophie saying, "If it isn't the tacky girl from the tacky hat shop." She gets forced to walk up the stairs after the two blob men couldn't carry the carriage anymore, the potion that makes her young is sweated out of her system, aging her by the the time she makes it up the stairs. As she sits down on a chair, a device, two very large lightbulbs, shine on her.

She gets her power removed, and escapes with Sophie to the castle where she stares at the fire, knows that Sophie is in love, and gives Calcifer a peeping bug that she found in a bag. Also, when they are looking for Howl, she found out who took Howl's heart and she cries, "You ruined the heart!" after Sophie puts a bucket of water on her. She does give Howl's heart to Sophie to break a spell on Howl. Towards the end of the movie, she stays on Howl's moving castle that is flying instead of walking as it was in the beginning of the movie. 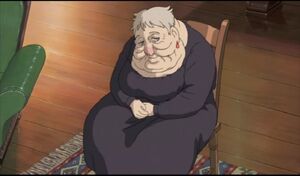 The Witch of the Waste, with her powers gone.
Add a photo to this gallery

Retrieved from "https://villains.fandom.com/wiki/Witch_of_the_Waste?oldid=3641999"
Community content is available under CC-BY-SA unless otherwise noted.