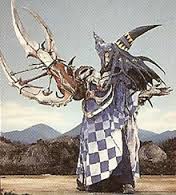 Witchblade is a friend of Lord Zedd's. Master Vile had stopped the Earth's rotation and time had gone backwards. The Rangers had been turned into children and could no longer access their powers. Master Vile eventually left, frustrated and Lord Zedd was back in charge. Billy had made a generator that would have reverted them back to their real ages, but he was the only one to use it, before it was destroyed by Rito and Goldar. The power coins were destroyed as well. Zordon had called on the Alien Rangers for help. The Alien Rangers had difficulty surviving Earth's drier climate. The kids had set off to search for an alternate source of power and Cestro was becoming weak.

Retrieved from "https://villains.fandom.com/wiki/Witchblade?oldid=2441823"
Community content is available under CC-BY-SA unless otherwise noted.