Having fun with Gentleman Ghost

Jade Tice better known as Wither is a relatively new and minor villainess from DC comics who debuted in the third issue of the miniseries Suicide Squad: Black Files. Wither is a succubus who at some point started dating Gentleman Ghost as members of the Suicide Squad. She worked with Sebastian Faust in his plans to destroy magic at all costs which put her on the opposing side of her lover and the rest of the Suicide Squad for a time before eventually rejoining.

Little is known about Wither's past other than she was somehow joined the Suicide Squad likely like the others being forced by Amanda Waller through either blackmail or other means. Either during this time or shortly before her and Gentleman Ghost started dating which gave Amanda Waller a means to control the ghost, however during one mission Ghost found out Wither was left behind and briefly presumed dead by some. As the Suicide Squad eventually catch up to Faust he makes a reference on how they should all understand how magic doesn't fix anything including how Gentleman Ghost can't truly interact with others in a way that can be imminent but how he will fix that if they join him even having Wither show up to convince Ghost right after she had gathered some mystical artifacts for him. Upon showing Wither and Ghost happily embrace, Faust points out he'll grant everyone their desires and elaborates his goal to save his wife and child before destroying all magic.

This gets Ghost to realize Faust would destroy him as well given his undead nature though Wither tries to reassure Ghost that Faust likely didn't mean him, this causes the two to beg the other to join their side so they can be together only to be separated by some rubble. As Faust continued his plans Wither faithfully followed him due to believing in his cause but later ends up betrayed. As Wither is near Ghost and the other Suicide Squad members Faust takes control of her body and turns her into an avatar of death that would suck out all their life forces, with Gentleman Ghost being the only one immune he was forced to shoot her to save the others and set her free.

There Ghost cradled what he thought was her dead body when in reality she was merely knocked out. As Wither is unconscious Faust bemoans on her being seemingly killed saying she was meant to be a sacrifice for his plans. Luckily for Faust who was shot and severely wounded at this time Wither regained consciousness moments before Ghost was about to kill him to avenge her and told Ghost she was fine. This leads to the lovers to embracing and Wither rejoining the Suicide Squad while Faust is taken into custody.

Wither is appears to be a young female with pale skin, purple hair, a set of horns and bat-like wings. Her outfit consist of a mini-skirt, thigh high black leggings with matching boots and a purple crop top. After being shot her head took the form of a skull consumed in purple flames but this was likely just a manifestation of her powers rather than it remaining that way.

Not much is shown of Wither's personality but what is shown are a desire to remain free above nearly all else, that and she is shown to be affectionate to Ghost whenever around. Of what little is shown outside that it seems she is rather energetic and seems to like doing missions to some extent provided not forced based on how she seemed happy with the mission she had done for Faust.

Wither is shown to have superhuman reflexes, strength and the ability to drain the life force of others. This along with being a demon she seems borderline immortal and near invulnerable given she took a shot from a pistol point blank to her skull yet only knocked unconscious for a very brief time. Wither is also gifted with the ability of flight and potentially the ability to use magic. 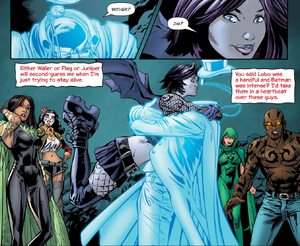 Add a photo to this gallery
Retrieved from "https://villains.fandom.com/wiki/Wither_(DC)?oldid=4011154"
Community content is available under CC-BY-SA unless otherwise noted.