NOTE: This article is about the normal Wither variant from vanilla Minecraft. You may be looking for information on the Wither Storm variant from Minecraft: Story Mode.

Wither Boss
The Second Boss
New Boss
Monster (by many)

The Nether (where the materials used to create it originate from)

Any Wither spawned by Steve or any player

Killing and destroying the world and living beings.

Destroy everything and everyone

The Wither, also simply known as the Wither Boss, is a malevolent hostile mob that violently attacks anything he comes across, and the secondary antagonist of the Minecraft franchise, serving as one of the main antagonists of the sandbox survival game Minecraft. He is also a major character in the AvM Shorts, appearing as an anti-hero in Season 1, the main antagonist of Season 2 and a minor character in Season 3.

He is one of the most well-known yet deadliest hostile mobs of the game, despite being an optional boss only. He can also be fought optionally before or after the Ender Dragon fight. However, it is up to the player to fight him or not, but it is required to obtain the Nether Star. The Wither is the second boss added to Minecraft, and was added in 1.4, 11 months after the official game's PC release. However, he does not spawn in any dimension, and actually has to be crafted by the player in order to be fought. He can be considered the boss mob for the Nether due to it being constructed of Soul Sand and Wither Skeleton skulls, items only exclusive in the Nether.

The Wither, created from Soul Sand/Soil Soil and Wither Skulls, appears as a giant, floating, three-headed Wither Skeleton. His left and right heads are smaller than the center head, and appear to either have their own necks or are stuck on the ends of its arms where his hands would be. Otherwise the Wither is limbless, with his bony body ending in a dangling spine below. When summoned, it glows blue with energy as it slowly regenerates its health before releasing a massive explosion, destroying everything nearby before flying off to attack anything it sees.

The Wither is infamous for his high aggression towards almost any mob, even mere animals, as it will ruthlessly kill every single mob it sees with no remorse, while most of mobs seeks to eliminate ONLY the player, Wither (alongside Illagers) are even willing to hurt children, even if it isn't hostile toward undead mobs such as zombies and skeletons it has no problem in murdering them due to being near its target.

His entrance will cause world to fall into darker (similar to the one where it's raining) once it's destroyed, the light will return, in pocket edition its is half of health is to be down it will summon wither skeletons as a way for help and crash through objects, ultimately breaking them due to losing ability to fly.

In the original version Wither's death is simply the same played as much as other mobs, however in pocket edition (and some others) it will turn completely white and be unstable not attacking player or doing anything but simply explode and destroying many things (or killing other mobs) after some time, therefore it could be argued if Wither has intended to commit suicide in order to eliminate the player as well.

The Wither is a very tough boss mob with many abilities, which include:

The Wither is one of the two main bosses in Minecraft, that was added in the 1.4 Pretty Scary Update, to expand the player's adventure in the game's Survival mode. It's achievement can only be obtained or unlocked after defeating the Ender Dragon. It can be summoned by placing 4 soul sands in a T- form, and adding 3 wither skulls on top of it (there is a 2x painting in the game that shows how to craft it). Once summoned, It will destroy anything in its path in the player's world.

Despite being the most powerful boss in the game, there are also strategies and weaknesses against The Wither:

Withers appear as minor characters in the Gameknight999 series. In Battle for the Nether, they are mentioned as being generals in Erebus' monster army. In Gameknight999 vs. Herobrine, Gameknight creates a Wither to distract the blaze army so it and his friends can track down Herobrine.

In Season 2, it's the main antagonist, but it only has that role thanks to being the most recurring antagonist, as it's lore-irrelevant. It first appears in "Build Battle" as its secondary antagonist. When Green is building a bear, it accidentally summons a Wither. Green fights the Wither while the rest of the gang doesn't bat an eye and just check the builds. At the end of the episode, the Second Coming gives the award to Blue, before the Wither blows up the build and everyone else. It later re-appears in "Lucky Blocks" as the secondary antagonist. Yellow, possessed by an Orb, spawns multiple Withers to kill its friends. After the Second Coming gets a powerful sword, it kills the Withers in one shot.

In Season 3, a Wither appears in the "Monster School" episode as one of many students. 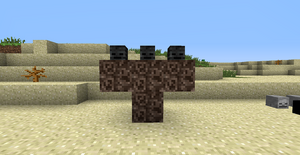 How a Wither should be spawned in Minecraft. 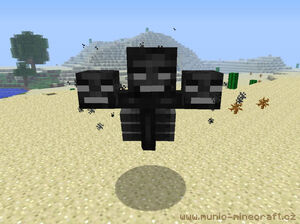 A Wither in the desert. 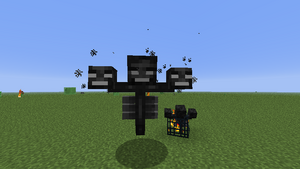 A Wither with a monster spawner that can create more Withers. 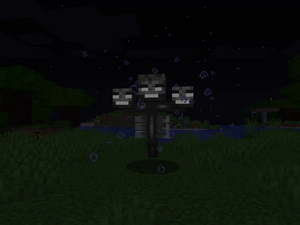 The Wither, being resurrected by the player. 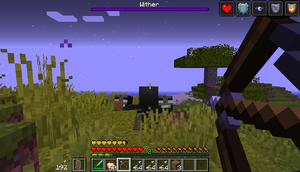 The Wither, fighting the player. 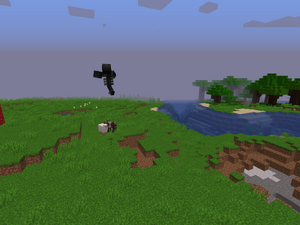 The Wither boss on a rampage during daytime, attempting to kill every living animal it sees. 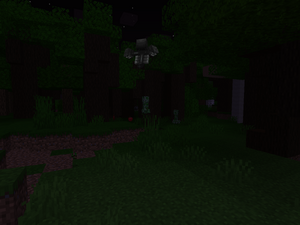 The Wither boss rampaging its other fellow hostile mobs during nighttime. 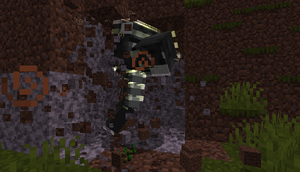 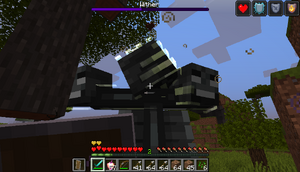 The Wither and the player, fighting to the death. 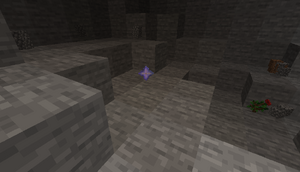