NOTE: This article is about the Wither Storm variant from Minecraft: Story Mode. You may be looking for information on the normal Wither variant from vanilla Minecraft.

Destroy everything it comes across (failed).

The Wither Storm is the central antagonist of Minecraft: Story Mode, appearing as the main antagonist of Season One and a posthumous antagonist in Season Two. It is a superpowered variant of the Wither.

Order of the Stone

When Ivor puts the Wither Skeleton Skull on top of the Command Block, Ivor tries to prove that he can defeat it, but the potion has no effect due to it not being the correct potion because either Axel or Jesse (depending on Jesse's choice when Axel attempts to take it) stole it earlier. Jesse throws the real potion, but the Wither Storm covers the Command Block, causing the potion to have no effect.

The Wither Storm continues to follow Jesse and his friends as they head to Gabriel's temple. When they try to escape, it tries to capture Gabriel, but he is rescued by Jesse, but then both Gabriel and Petra and Jesse must choose to rescue one of them and once he or she makes his decision, he or she tries to rescue the other one but the Wither Storm knocks him into the nether portal.

Later, at the end of the episode, it appears at the sunset as a warning, and Lukas says, "Please hurry," to warn Jesse and the others that the Wither Storm is coming for them, but didn't realize at the time that it was tracking Gabriel's amulet.

The Last Place You Look

The team attempts to destroy the Wither Storm with the Formidi-Bomb after receiving it, however, the Command Block was not destroyed in the process, allowing it to come back to life. To make matter worse, as the Wither Storm can multiply, some fallen pieces of it also regenerates and turned into two new, smaller Wither Storms known as Severed Wither Storms. The team then flees to find another way to destroy it.

A Block and a Hard Place

The Wither Storm quickly tracks down Jesse and his friends alongside its two counterparts, but when they meet up with Ivor once again, they flee to the Far Lands and receive a weapon that can destroy the command block. They manage to anger enough Enderman to tear a hole in the main Wither Storm.

After a long, hard battle, Jesse destroys the Command Block in the Wither Storm, thus finally destroying it alongside the other two Wither Storms. Despite this, from the victory, there comes a great cost: aside many hostile creatures that were killed in its path of destruction, the Wither Storm has left tremendous damage, caused the death of one of the members of the Order of the Stone (either Ellegaard or Magnus), and indirectly killed Reuben.

The Wither Storm's behavior is similar to a regular Wither's, but it is on the more cataclysmic and dangerous level due to its power. Though Ivor programmed the Command Block that was used for its creation to ensure that his Wither would obey him, it ultimately went berserk and caused destruction throughout the land as it ignored him. Ultimately, the Wither Storm is a primal living force of destruction that only exists to destroy everything until nothing is left.

In episode 4, A Block and a Hard Place, Ivor revealed that the Wither Storm does not cause destruction randomly; when programming the Command Block that created the Wither Storm, he also programmed to have it follow the Order of the Stone's amulet, which explained why the Wither Storm followed wherever Jesse and his friends went.

Compared to a regular Wither, the Wither Storm's powers are so immense that it is more like an incarnation of the God of Destruction. Its Wither Skill projectile's firepower is far more destructive than a normal Wither's and has developed the ability to project a powerful tractor beam that sucking in any mobs or blocks in it, and inflicts them with Wither Sickness upon being devoured. The Wither Storm can also display God-like strength and durability, as its tentacles can easily break through Obsidian walls like a twig, even before it reaches its massive size, and is immune to conventional weapons. Its regenerative ability that comes from a Command Block used to create it is so potent that even after being blown into pieces with the Formidi-Bomb, the Wither Storm can eventually resuscitate in mere minutes as well as allowing some huge chunks of it to grow into entire separate creatures and take on lives of their own, which explained why two smaller Wither Storm can emerge alongside the original one. It means had Ivor's Wither Storm allowed itself to mutate several times with destructive weapons such as Formidi-Bombs whilst its Command Block remained intact, it would allow the Wither Storm to overrun the whole world (which fortunately never happened).

In spite of the God-like strength that it possesses, the Wither Storm can actually be destroyed for good, as it has a few weaknesses. It is true that it cannot withstand a Formidi-Bomb's explosion, and can be incapacitated by it, but using such a highly destructive weapon is not recommended as should it be blown into pieces with its Command Block still intact, the Wither Storm would just regenerate and split into three or more creatures. The first thing that can delay the creature's advance is the mutilation by Endermen. An Enderman's ability to dismantle and move blocks causes rapid and significant harm on the Wither Storm, and an entire horde is enough to keep harming it that it cannot regenerate. The only thing that can destroy the Wither Storm, as well as its brethren, is destroying the Command Block used to create it, with weapons that are enchanted with the same power with the Command Block itself being used in Story Mode.

The Wither Storm has another unique ability: its heads can pop out inside its body, as shown in A Block in a Hard Place when Jesse went inside the Wither Storm and two of its heads attacked him by popping out from the skin.

The Wither Storm can be created with the same materials and same fashion as a normal variant. The difference, however, is that the middle soul sand must be replaced with a Command Block that immediately functions as its heart. Once brought to life, the Wither Storm will at first have a typical Wither-like form, but once it assimilates any objects around it, it evolves into a floating behemoth with long, powerful tentacles, three heads, glowing purple eyes, and large teeth. At the end of episode 3, the failed attempt to destroy the Wither Storm caused it to evolve and separate into three pieces, two that bear resemblance to the original Wither Storm, and one with a giant head.

The Wither Storm in the background of the game's cover art. (If you look closely to the top of the image, you can see the Wither Storm.) 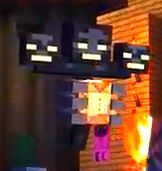 The Wither Storm in its juvenile stage. 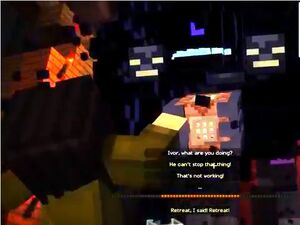 The Wither Storm developing, as it now has one mutated head. 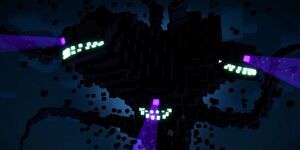 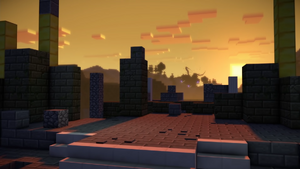 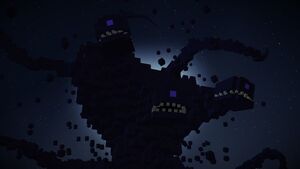 The Wither Storm in the epilogue of The Order of the Stone. 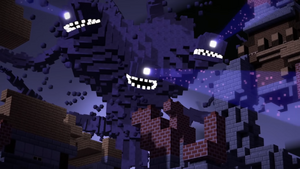 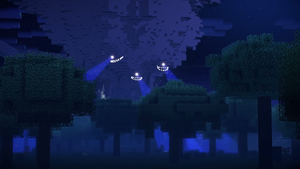 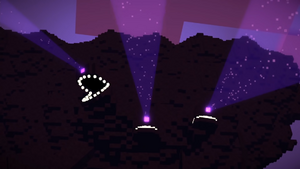 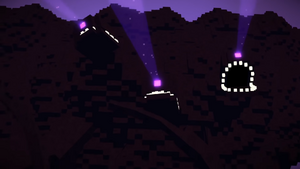 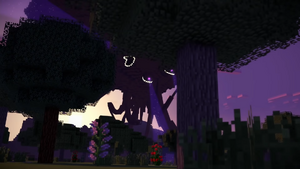 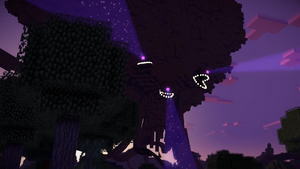 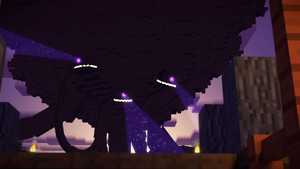 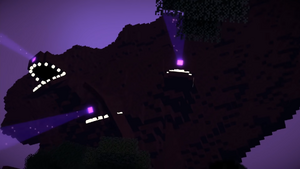 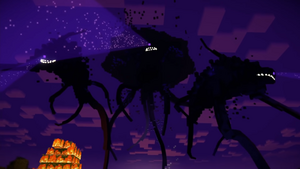 The Wither Storm splitting into 3, as the Command Block wasn't destroyed. 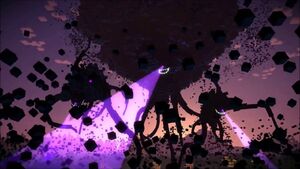 All three Wither Storms, consisting of the main one created by Ivor, and the other 2 created following the Formidi-Bomb's explosion. 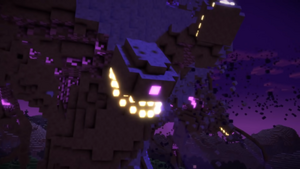 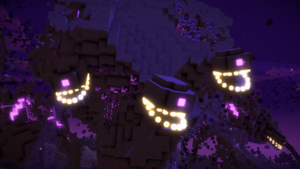 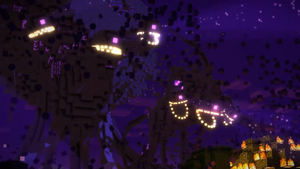 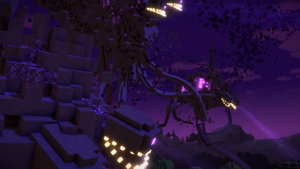 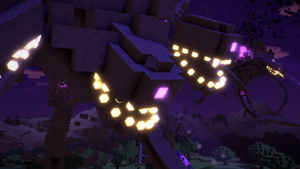 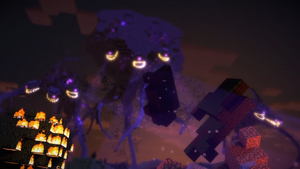 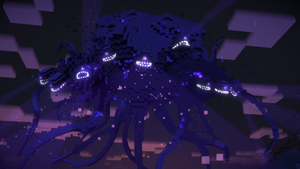 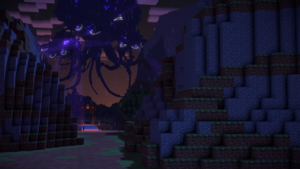 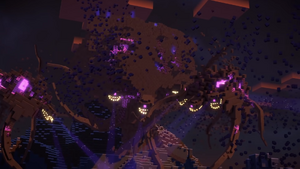 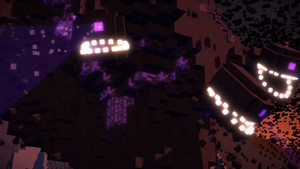 The Wither Storm during it's final battle. 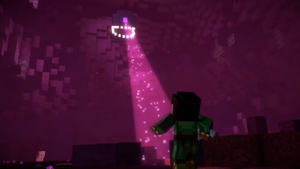 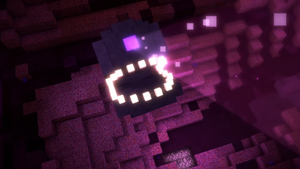 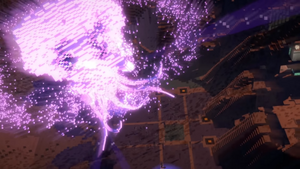 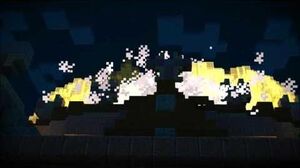 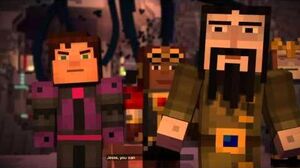