The Wizard, also called the "Evil Wizard", is the main antagonist from Castle Crashers.

The Wizard first appears at the beginning of the game, where he invades the kingdom's castle and steals a giant crystal from behind the King's throne, escaping by floating with the crystal. The King immediately dispatches his knights to go after him and his henchmen, who kidnapped the four princesses. He appears again in the Lava World level, along with the Necromancer, his right hand. They create undead minions for the heroes to fight and later the two revive the Cyclops, which had been previously defeated. After this he appears in the Industrial Castle after the knights defeat the machines controlled by the Industrial Prince, who gives the Orange Princess to the Wizard and attempts to flee along with him only to get zapped and left behind.

The knights finally find the Wizard on his castle, along with the Painter, the revived Cyclops, and the Necromancer, using the power of the crystal to raise his castle into the sky. After his three minions are defeated, the knights finally confront the Wizard himself. After the four floating crystals controlled by him are destroyed he drops into the arena, using a magical shield which changes between protecting him from either physical or magical attacks, all while shooting magic bolts from a distance. After this form is defeated he inflates and starts floating while dropping magical bombs, and after being defeated a large golden chest drops on him, much like the ones which drops on defeated bosses. Upon opening it, however, the Wizard comes out transformed into a giant spider monster, attacking with his claws and dropping cultists to attack the knights. Once the spider form is defeated he once again inflates, after which he returns to normal and fights the knights using a large flaming sword. After such a long fight, the knights ultimately prevail, recovering the crystal and rescuing the Orange Princess. 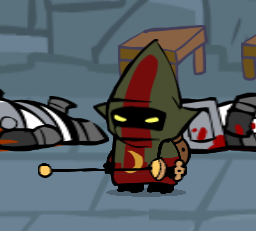 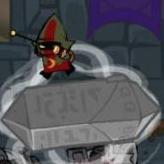 Retrieved from "https://villains.fandom.com/wiki/Wizard_(Castle_Crashers)?oldid=3603243"
Community content is available under CC-BY-SA unless otherwise noted.