Wizard Zombie, or simply known as the Wizard, is one of the secondary antagonists in the Plants vs. Zombies franchise. He is a zombie wizard who takes part in fighting plants.

He was voiced by Max De Vrie in Plants vs. Zombies 2.

Wizard Zombie made his debut in the eleventh night of the Dark Ages stage as one of the zombie horde. He transforms plants into passive sheep, which allows him and any other zombies to proceed through the line of defenses.

If the players prevent him from turning plants into sheep, they get the achievement "Not Baaad".

Wizard appeared in Plants vs. Zombies: Battle for Neighborville as a playable character in the Support class. His primary weapon is the Orbacadorbra. He can be unlocked through Luck O' the Zombie's festival prize map, or 500,000 coins (or 1,000 Rainbow Star) through Rux's shop.

Wizard appeared in the comics as one of Dr. Zomboss's henchmen to fight the plants. 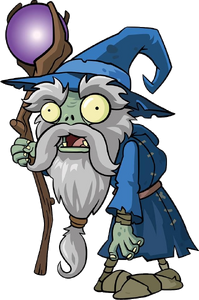 Wizard Zombie
Add a photo to this gallery

Retrieved from "https://villains.fandom.com/wiki/Wizard_(Plants_vs._Zombies)?oldid=3967694"
Community content is available under CC-BY-SA unless otherwise noted.