Bosses of Jocelyn the intern

Forcing fictional characters to fight to the death.

Use research and science to prove who would beat who in a fight to the death.

Wizard (often shortened to Wiz) and Boomstick are the main protagonists of the Rooster Teeth webseries DEATH BATTLE. They are the presenters of the titular show, a series that uses science and research to determine which fictional characters would win in a fight to the death, then force the characters into combat situations that more often than not result in a death.

Boomstick's history was hinted at throughout various jokes in the series. Accordingly, Boomstick's father was a zombie/pirate akin to Cervantes from Soul Calibur and Boomstick was abandoned by him at an early age, so early in fact that he earnestly considered him an imaginary friend. However, Boomstick's relation with his father is hardly portrayed consistent, as, while on some occasions it would seem Boomstick never knew his father at all, while on others they apparently shared some relation (as Boomstick says that the only thing his father ever gave him was a sore cheek, clearly alluding to him being abusive). He also has half of his right leg replaced with a super shotgun from Doom 2. Whether he lost a portion of his leg due to an accident or intentionally cut it off is unknown.

As a child, Boomstick grew up loving series' such as Pokémon, Power Rangers, Dragon Ball Z and Final Fantasy, as shown when he is saddened when a character from his childhood loses a fight and by him tearing up when Wiz mentioned Aerith's death in Final Fantasy 7 in the episode "Link vs Cloud". At some point in his adulthood, Boomstick married and had a child (who is rumored to be Evil Craig), but eventually divorced. He later started working for ScrewAttack!. Season six reveals that he does have a daughter whom he does not like anyone dating.

Little is known about Wizard's past. However, at some point in time, it was known that Boomstick played with his tachyon table saw and accidentally cut off his arm, forcing him to get a cybernetic replacement. Wizard has said that he does not mind, as he views his mechanical modification as superior to his original arm anyway.

While the history of their partnership is largely a mystery, according to Boomstick, on the first day of work, he showed up to work naked due to forgetting his clothes. However, given their interactions, they have some moments of liking each other, but they generally do not get along. Wizard, often gets upset with Boomstick for his peverted nature and lack of insight. Boomstick meanwhile, is not as easily annoyed with his co-worker but does pick on him a lot. Their on and of rivalry has now gotten to the point where they pulled petty and outright dangerous pranks on each other. Despite this, they do so some signs of caring about each other with Wiz openly expressing concern for Boomstick when he does something reckless.

As mentioned earlier, once particular instance of Wiz and Boomstick's villainy comes from the episode "Deadpool vs Pinkie Pie", in which the titular characters are completely aware of their existence.

After giving a brief history lesson on Wade Wilson, Boomstick opts to skip his segment (as they had previously covered it in "Deadpool vs Deathstroke") only for Deadpool to reappear and tell them that, since he has a movie out now, they have loads more footage of him to use. After going through Deadpool's history, abilities and feats, Boomstick brings up that Deadpool's healing factor is also a part of his greatest weakness, and when Deadpool questions this, Wiz explains that his years of immortality have trained him to think that he's invincible and that a clever opponent could use that to their advantage. Saying that, Wiz takes out a pencil and erases Deadpool from the video.

Later, during Pinkie's analysis, she begins talking directly to Wiz and Boomstick, frightening Boomstick. After going over her history, abilities and feats (such as when she helped her friends defeat "a glowy horse powerful enough to move the moon"), Boomstick brings up that the only way she could get any scarier would be if there were more of her, only to discover that Pinkie actually knows how to clone herself using the Magic Mirror Pool. Wizard then quickly tells Pinkie that "you'll be getting a new visitor soon, very soon, like right now soon", sending her to encounter Deadpool.

At the start of the fight, Wizard and Boomstick teleport Deadpool to the outskirts of the Everfree Forest and he greets them, eagerly asking them "Who's the lucky victim?". Only to be both confused and disappointed when he realizes he's going to be fighting a pink pony. Deadpool and Pinkie begin fighting (after Pinkie uncharacteristically kicks Deadpool for interrupting her welcome song), but they both stop fighting and become friends when they both realize they can break the fourth wall (Deadpool uses the like/dislike bar as a light-saber and Pinkie uses an advertisement for Super Rad Raygun to defend herself). After jumping out of the video and going into various previous DEATH BATTLE episodes ("Batman vs Captain America", "Ken vs Terry" and "Amy Rose vs Ramona Flowers"), Deadpool discovers one of the DEATH BATTLE Cast podcasts and says that they are the ones responsible for sticking them and other characters into fights to the death. When asked by Pinkie if he means Wiz and Boomstick, he tells her that he was talking even more meta than that.

Upon entering the video, Deadpool confronts Ben ("the idiot with the stupid face"), Chad ("the idiot with the stupid hair") and Nick ("the idiot who writes my jokes because he thinks that he is funnier than me") and asks them why they would put him in another DEATH BATTLE on his birthday. Upon hearing this, Pinkie drags him out of the video and takes him to a party with the entire cast of My Little Pony: Friendship is Magic, where he comically states "well, so much for the 'death' in DEATH BATTLE, now, right?" before he and Pinkie share a laugh while the camera fades to black.

After the "fight", Wiz and Boomstick are immediately confused and distraught by the fact that neither Deadpool or Pinkie Pie ended up killing each other, and Wiz realizes that they are the true losers of this battle.

Before the 97th battle, "Carnage vs Lucy", Wizard and Boomstick were finally shown onscreen. It is revealed that Boomstick never took the lens cap on their camera off, resulting in them never appearing until then. Wizard proceeded to get angry at Boomstick, but they decided that they should show their faces for the 100th episode and just blame Jocelyn for forgetting the lens cap.

Wizard and Boomstick appeared as characters in a crossover episode of Red vs. Blue, orchestrating the fight between Agent Carolina and The Meta. Throughout the episode, they frequently demonstrate the combatants' weaponry by attacking Grif with them, including shooting him multiple times with a grenade launcher, tank, assault rifle, and blades. Additionally, it was heavily implied that the Red vs. Blue character Sarge is actually Boomstick's mysterious father, as he reacts awkwardly when Boomstick mentions that his father left him and his mother to join the army and never came back (although everyone except Boomstick realizes this).

Wizard is a very intellectual and meticulous person who acts as the brains behind DEATH BATTLE, providing technical information and doing the math behind the character's feats and abilities. Wizard is also fairly quick to anger as well, typically because of his co-worker's incompetence, as shown when he completely loses his cool when having to explain the name of Guilty Gear's main villain "That Man", or when he punches Boomstick for suggesting that Cyrax should have fought Sektor instead of Fulgore. It is also shown that Wiz has an extremely hard time talking to and interacting with girls, as demonstrated when Boomstick compares Mike Kirby's singing voice (which is apparently so bad that it destroys all enemies on the screen) to Wiz's voice when he performs karaoke in front of ladies. Wizard, much like Boomstick, has a very clear hatred of his coworker, frequently arguing and mocking him on various occasions. Wiz also expresses a desire to clone Boomstick, likely just so he can replace him.

Boomstick is the complete opposite of Wizard; he is rude, lazy, loud, arrogant, easily provoked and completely incompetent, having clearly not received a proper education in anything except violence. Opposed to Wiz's technical expertise, Boomstick specializes in delivering information about weapons and provides comic relief, making puns based off the characters, their abilities or their deaths to end every episode. Although it is rarely shown, Boomstick does indeed have a softer side to him. As mentioned earlier, he feels sad whenever a character he likes loses (but rarely feels compassion for them otherwise) and started to tear up when Wiz mentioned Aerith's death. He also is mentioned to have a pet turtle called Mr. Snappy that he seemingly treats so well. Furthermore, one could argue that Boomstick's like of insight is a front. He is smart enough to help explain things meaning he does understand a lot regarding basic knowledge. Therefore, it is clear that most of the time, he is smart but lacks common sense/isn't as crafty as his co-worker.

Wizard has a rather large intellect and performs all calculations used to find out how powerful some characters really are. As mentioned earlier, he also has a cybernetic arm, which reportedly suffers from several glitches (although Wizard may have been joking, as he used his "glitches" as an excuse to punch Boomstick). Boomstick has vast knowledge of all kinds of weaponry and firearms and (according to him) regularly punches down trees in order to catch squirrels for supper, implying that he has some sort of super strength, although he was likely exaggerating.

As the show's presenters, Wizard and Boomstick both share the ability to control the characters featured in DEATH BATTLE, and, while they cannot directly control them (as it would go against the rules of the show) they have the power to force characters to abandon their moralities, influence their decisions and force them to fight each other, to the point where they act completely out of character (such as when Beast and Goliath decide to fight each other to the death despite being heroes and having no reason to fight). In addition to this, as stated by Wiz in a Q&A video, should a character be killed, they could always revive them if they saw a need to, as shown by them reviving Batman, Goku, Shadow the Hedgehog and Dan Hibiki. It should also be noted that, on many occasions, had it not been for the interference of Wizard and Boomstick, many of the characters showcased in DEATH BATTLE would've become friends instead of killing each other, as shown in the alternate ending of "Shao Kahn vs M. Bison" and "Deadpool vs Pinkie Pie". 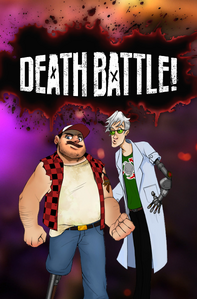 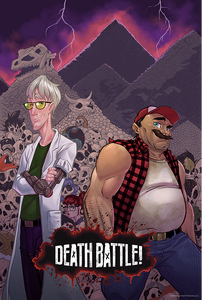 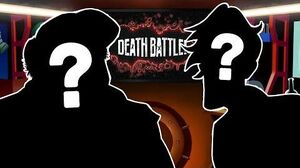 Wiz VS Boomstick RAP BATTLE! Written by YOU! 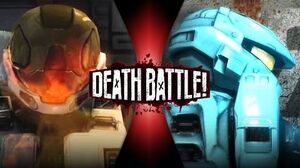 Meta VS Carolina (Red VS Blue) DEATH BATTLE!
Add a photo to this gallery

Retrieved from "https://villains.fandom.com/wiki/Wizard_and_Boomstick?oldid=3497453"
Community content is available under CC-BY-SA unless otherwise noted.