The Wizard of Deception is a demonic wizard and a villain in Mighty Morphin Power Rangers. He was sent by the Ghost of Darkness to destroy the White Ranger.

He was voiced by Tony Oliver.

He first takes control of Bulk and Skull and forces them to get a strand of Tommy's hair so he could clone him. Bulk and Skull are unsuccessful, so the Wizard of Deception takes matters into his own hands. He has a bunch of putties capture Tommy and cut a strand of his hair. After getting the hair, the Wizard uses the hair to create a duplicate Tommy, to once again be the evil Green Ranger. The evil clone calls for the Rangers to meet him, and when they arrive the Wizard of Deception sends the Rangers back in time, to Angel Grove in the colonial 1700's.

After battling the White Ranger, the evil Green Ranger is sent by the Wizard to the Command Center to send Zordon a message. After returning, the Wizard has the clone attack the city with the Dragonzord while he too goes into the past. Upon arrival in the past, the Wizard turns three rats into monsters in order to occupy the other Rangers.

Back in the present, The Wizard of Deception faces the fallen Tommy alongside the evil Green Ranger after the Dragonzord easily defeats the Tigerzord, telling him to surrender. Tommy manages to kick the magic wand from the Wizard's hand and use it to go back in time, where he is able to retrieve the other Rangers and safely bring them back to the present. The other rangers morph and take on the Dragonzord while Tommy blasts the Wizard of Deception with his own wand, reducing him to a pile of black clothing garb and freeing the clone Green Ranger from the Wizard's evil spell. 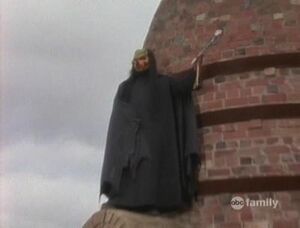 The Wizard of Deception
Add a photo to this gallery

Retrieved from "https://villains.fandom.com/wiki/Wizard_of_Deception?oldid=3426904"
Community content is available under CC-BY-SA unless otherwise noted.