Owner of the Enchanted Forest

Wizardheimer is the main antagonist of the Super Mario World cartoon episode "Ghosts 'R' Us". He is an evil Koopa Wizard who inhabits the Enchanted Forest of Dinosaur Land, imprisoning trespassers in the basement of his haunted house.

He was voiced by John Stocker.

While Mario and his pals were searching for Oogtar the caveboy in the Enchanted Forest, Luigi accidentally bumps into Wizardheimer. Luigi apologizes by addressing him as a regular Koopa Wizard, but Princess Toadstool corrects him, claiming that the wizard is "Wisenheimer", the most terrible Koopa Wizard of them all. Wizardheimer angrily shouts out his correct name while summoning a bolt of lightning, scaring away Yoshi. He then orders Mario, Luigi, and Toadstool down a Warp Tube to his haunted house, threatening to blow them up with a Bob-omb should they refuse. After they jump in, Wizardheimer follows them in, where he shackles the trio in the basement. Toadstool demands to know what Wizardheimer wants from them, to which he coldly remarks that being evil was simply his nature. Before leaving, he taunts them that he loves to have his guests "hang" around.

Meanwhile, after Yoshi saves Oogtar from Piranha Plants and a Wiggler, he tells the caveboy about Wizardheimer kidnapping the group and imprisoning them in his mansion. Dauntless, Oogtar marches over to Wizardheimer's house and knocks on the door, to which the wizard answers and orders him to scram. Oogtar demands to be brought to his friends. Wizardheimer sarcastically agrees to Oogtar's request by warping the caveboy to the basement and chains him up as well.

Now realizing that it is left to him to save his friends, Yoshi muscles up his courage and rushes inside the haunted house, past Wizardheimer's traps and ghost minions. On the basement stairs, he is attacked by Wizardheimer himself, shooting Yoshi with magical spells. With advice from Oogtar to use his tongue, Yoshi snatches Wizardheimer's wand and eats it, leaving the Koopa Wizard powerless. Wizardheimer demands Yoshi to spit back up his wand, only for Yoshi to belch out a blast that cuts the prisoners' restraints. The now free Mario defeats Wizardheimer by jumping on his head, sending him tumbling down the stairs straight into the bowels of his own basement.

It is unknown what has happened to Wizardheimer afterwards.

Wizardheimer is a cunning Koopa Wizard who imprisons citizens of Dinosaur Island in the dungeon of his basement simply for trespassing into his forest. He also appears to be obnoxious, given his loud and overblown voice, alongside his intolerance for people mispronouncing his name. 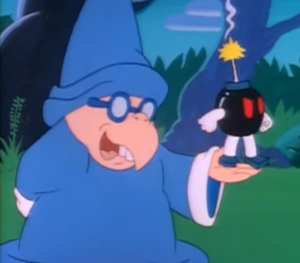 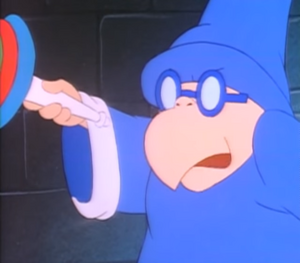 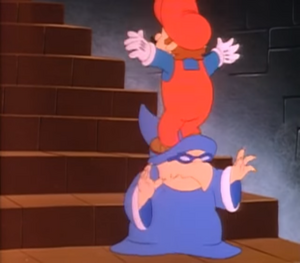