Ruler of the realm of Nightmare

Creator and master of Nightmarens
Self-proclaimed god of nightmares

Bringing nightmares to life.
Controlling Nightmarens.
Abusing his minions when they fail him.

Take over Nightopia and expand the realm of Nightmare (failed).

Wizeman, also known as Wizeman the Wicked, is the main antagonist of the NiGHTS franchise.

Appearing as the main antagonist in both NiGHTS into Dreams and NiGHTS: Journey of Dreams as well as the Archie comics series based on the latter games. He is the pompous creator/king of evil creatures called the Nightmarens, and the supreme master and creator of the world of bad dreams simply called Nightmare.

He was voiced by Roger L. Jackson, who is known for voicing Mojo Jojo in The Powerpuff Girls TV series, Ghostface in the Scream series of horror films, and Willie Wumpa Cheeks in the Crash Bandicoot videogame franchise.

Wizeman the Wicked was the first and most powerful Nightmaren of them all. Not only he is the tyrannical master of Nightmare, but Wizeman is actually also the God of Nightmare as well; it is said that he is a visitor without any Ideya. Being the creator of evil creatures called Nightmaren, he planned to destroy Nightopia in order to reshape it and to expand his empire of Nightmare. In order to do this, he decided to steal Red Ideya from sleeping humans. Unfortunately for him, one of his Nightmaren, NiGHTS, betrays him and vows to stop his evil plans. In the end, Wizeman was finally and completely destroyed and his evil kingdom of Nightmare was no more.

Wizeman appears on the final lap of the Dream Valley track. He interferes by lifting boulders across the track and tossing them at the racers.

In the Nightmare Zone DLC of Sonic Lost World, Wizeman appears at the beginning of the zone when he warps Sonic to Nightmare. One of his hands later appears as the combat platform for Zomom.

Wizeman appears as a strange, caped humanoid creature with a spiked metallic ball helmet covering his head since it is shown in NiGHTS into Dreams that his face is actually quite ugly and uses the helmet to hide it. His mask lacks a face with the exception of what appears to be a mouth, and he has six metallic flying hands with glowing purple eyes on their palms, which can fire magical lasers and cast various dark magic spells. On his cape appears to be some sort of amulet with a Blue Ideya and two Green Ideya, but it is unknown if they really are pieces of Ideyas. Wizeman also has some sort of a spiked crown on top of his head.

Wizeman is the cruel, arrogant, manipulative and dictatorial creator of Nightmare who views himself as a blasphemous god. He despises every source of light and good; thus he shall stop at nothing to destroy Nightopia and spread darkness to everything. He lacks feelings of sympathy or compassion, so if any of his creations displease him, Wizeman has no qualms about destroying them, such as crushing Donbalon in his hand and sending Bomamba down to the deepest depths of the world of Nightmare and towards oblivion. Reala is not spared from Wizeman's wrath, being insulted and threatened on a regular basis, despite being Wizeman's strongest underling and "right-hand man".

He refuses to accept NiGHTS' free will and the ability to think for himself/herself. Instead of destroying NiGHTS, Wizeman tries, again and again, to capture him/her and take back what is "his". In the true endings of Journey of Dreams, Wizeman's patience ran out and he intended to remove NiGHTS' mind and replace it with a more obedient one. Wizeman is also very sadistic and treacherous, as he takes delight in the nightmares of others, especially if he causes such bad dreams to happen. He also enjoys spreading dread and horror. Wizeman hates goodness and light. He does not like it when NiGHTS continues to defect and oppose him.

He and his nightmarish creations always prey upon Visitors (dreamers), and seeking out their Ideyas. He also despises both happiness and freedom. Wizeman always views the Nightmarens not only as his slaves, but also as his "children".

Being the lord of nightmares and king of the Nightmarens, Wizeman can shoot very powerful dark rays of energy out of his many hands and can cast various magical spells. He also has the power to create many Nightmarens and even clones of himself. 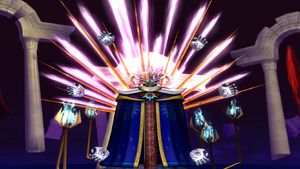 Wizeman preparing for battle in NiGHTS: Journey of Dreams. 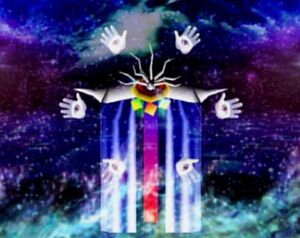 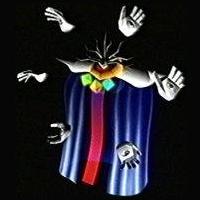 Wizeman in NiGHTS Into Dreams. 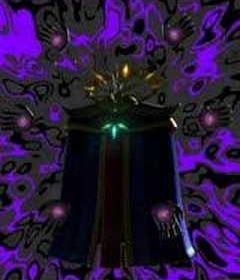 The God of Nightmares aka Wizeman. 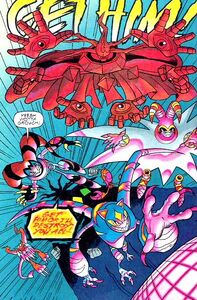 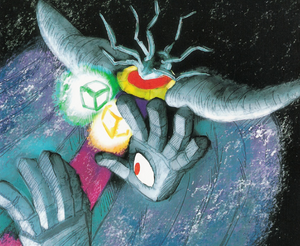 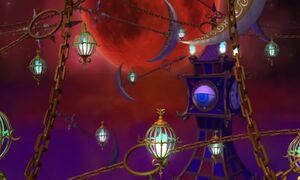 The Nightmare Zone
Add a photo to this gallery

Retrieved from "https://villains.fandom.com/wiki/Wizeman?oldid=3608604"
Community content is available under CC-BY-SA unless otherwise noted.