Racing (when he is battled).

Take over Timber's Island and brainwash its people to be his servants.

Invade and rule over other planets (both failed).

Wizpig is a character in the Donkey Kong series. He is a gigantic, pig-like, alien sorcerer and the main antagonist of the game Diddy Kong Racing (and remake for Nintendo DS).

He was voiced by Chris Seavor.

Not much of Wizpig's past is known, except that Wizpig, bored, decided to conquer his own planet. Succeeding in this endeavor, Wizpig forcibly transformed his homeworld into a high-tech amusement park called Future Fun Land for his own pleasure. Eventually, Wizpig once again, grew bored and decided to leave his planet to look for thrills on other inhabited worlds. One of the thrills that Wizpig discovered was racing, this sport eventually became Wizpig's favorite thing to do, along with causing chaos.

From then on, Wizpig went from world to world causing destruction and racing those who were brave enough to challenge him. After a while, Wizpig would grow bored of the planet he was on and would eventually leave it, possibly destroying it after he had his sadistic "fun" on it.

Wizpig then attempted to take over Timber's Island by brainwashing the members and forcing them to guard a piece of his amulet, but Diddy Kong and friends managed to collect all pieces of the amulet, allowing them to race and defeat him. In anger, he demands a rematch, this time on Future Fun Land. But again, he is defeated, and his rocket ship malfunctions and strands him on an deserted planet.

However, his ship is seen with a laugh that sounds like Wizpig's stated that he somehow escaped the planet.

In Diddy Kong Racing DS, Wizpig can be unlocked by completing Adventure Mode 2, although his size is scaled down to fit in his own vehicle. 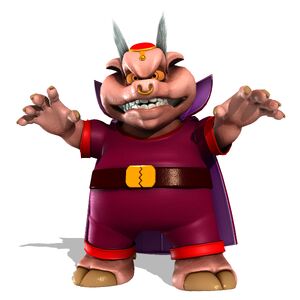 Wizpig
Add a photo to this gallery

Retrieved from "https://villains.fandom.com/wiki/Wizpig?oldid=3829642"
Community content is available under CC-BY-SA unless otherwise noted.