To serve such evil individuals with great power worthy of being his master.

Wizzro, also known as the Twisted Wizard and the Magician of Darkness, is a ghoulish evil wizard with powerful dark magic and a major antagonist for the first half of The Legend of Zelda spinoff game Hyrule Warriors, and the secondary antagonist of the DLC pack Cia's Story. He is a sentient and malevolent ring which was given physical form like that of a dark sorcerer after years of stealing energy. He will blindly follow any who are evil and possess great power. He now serves Cia whose evil magic gave him such a body, and he pledged his allegiance to her, as she was now like a mother to him. He aided her and her other ally Volga in their war on Hyrule.

Inside Eldin Caves, Wizzro joined forces with Cia after he was awakened by her. Despite this, Cia grew wary of his eagerness to join her, which got proved when he helped Volga and his forces attack Hyrule. Cia defeated Wizzro, and afterward, used magic so they would obey her.

At the beginning of the game, Wizzro, along with a army of monsters, attack Hyrule Castle. After Volga flees the fight and Link getting his Triforce of Courage, Wizzro summons King Dodongo as a plot so he would be able to kidnap Zelda. However, Zelda manages to escape from the scene under her Sheik alter-ego.

Wizzro then reappears in Eldin Caves, trying to stop the heroes from going to Faron Woods, joining the fight himself when Link and his partners use Bombchus to make a path. However, Wizzro ends up beaten and flees to Faron Woods, where he is found once more. He sends Gohma as a distraction, and then retreats again.

After Cia opens the Gate of Souls, Wizzro goes to the Era of Myth disguised as Zelda, tricking Darunia to attack the Zora, managing to take of the Water Temple before Darunia comes to his senses. The Hyruleans and the Goron, with the help of Ruto, get to Wizzro's base, where he used the disguise to temporarly lower morale, and after Sheik and Impa cheer up the troops, uses King Dodongo and his disguise to attack the heroes. This fails, as they are both defeated, Wizzro's disguise is lifted, and the mage flees once more.

As one last try at stopping the Hyrulean Forces at the Temple of the Sacared Sword, he uses magic to control the dead inside the temple to attack the heroes as he disguises himself as Lana. But, being the hero, Link wins the fight against him and frees the Ghost Soldiers. Wizzro then rushes deep inside the temple, trying to kill the hero when Link gets the Master Sword to no avail, making him run away to the opposite end of the temple. After he is defeated and Zelda is saved, he then leads the group to Temple of Souls, noting that Cia will be upset at his failure.

In "Darkness Falls", Wizzro originally fights with Cia's army to stop Ganondorf's Forces. But after noting how powerful the enemy is, Wizzro betrays Cia to fight with Ganon's troops. After he is defeated, he is sealed back in the ring for being a traitor, as Cia replaces his troops with Dark Links.

Using black magic granted with his ring to fight, Wizzro is able to fire magical blasts, creating fireballs, firing lasers, manifesting explosions, and summoning one-eyed, snake-like creatures and large hands to grab and slam his foes. For when he needs to move, he can combine with shadows to teleport, either away from danger or towards the opposing army.

He can also disguise himself as other people, and can use their powers as well. The only drawback is that is when transformed, the disguise appeared more gray, allowing people to tell him apart from the real person. 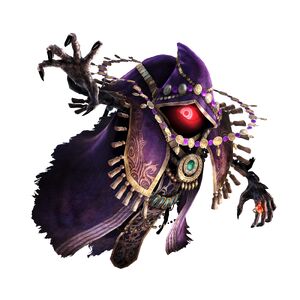 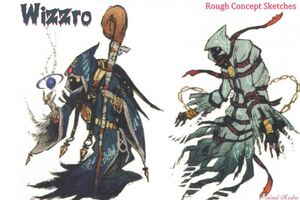 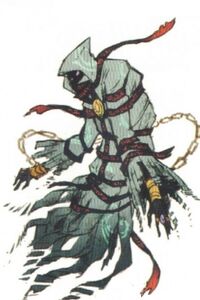 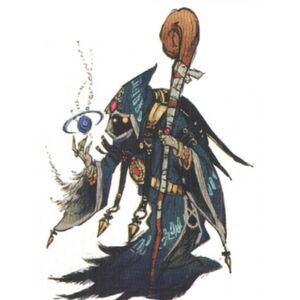 The Magician of Darkness 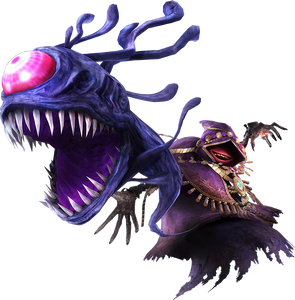 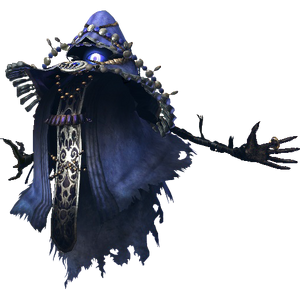 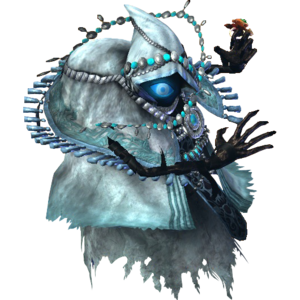 Wizzro's Twilight outfit.
Add a photo to this gallery

Retrieved from "https://villains.fandom.com/wiki/Wizzro?oldid=4208222"
Community content is available under CC-BY-SA unless otherwise noted.