WolfWrath (also known as Chili Dog in the Japanese version) is a monster owned by Nightmare Enterprises, and is ordered by King Dedede from the Customer Service and the main antagonist in the Kirby: Right Back At Ya! episode "Hour of the WolfWrath".

WolfWrath was one of the most powerful monsters created by NME and served him well in the war between the Star Warriors and Nightmare Enterprises.

At some point during the war (possibly after it), Wolfwrath encounters the master swordsman Meta Knight and forces him on the run; a feat that very few have ever accomplished. Meta Knight attempts to elude the creature in a valley, but then he was then stopped by Blade Knight and Sword Knight, who were soldiers-turned-bandits at the time. As they attempted to rob Meta Knight, WolfWrath then leaps at them from a cliff and prepares to kill the two with a destructive fireball, but they are saved by Meta Knight, who reflects WolfWrath's fire back. Meta Knight then jumps onto WolfWrath's back and the monster tries to shake him off, causing them both to fall into a river. As WolfWrath is weakened by water, it quickly escapes back to its master, but swears revenge against Meta Knight for the humiliating defeat. Afterwards, Sword and Blade gratefully swear their loyalty to Meta Knight for saving them and serve in his quest to defeat NME.

Many years later, WolfWrath was then ordered by King Dedede to eliminate Kirby. But as soon as the monster arrives, it immediately blows a hole in the wall and flees in search of its target. Customer Service then admits that WolfWrath is uncontrollable and obstreperous, making the oppressive tyrant worry that it will attack him as well. Sword and Blade then see WolfWrath running through the castle grounds everywhere and proceed to warn Meta Knight of their old foe. Dedede places the entire castle on lockdown, so that his guards can capture and contain the creature.

Kirby enjoys a game of soccer with Tuff until WolfWrath appears, catching the ball and popping it with its teeth. Locating its prey with its heat vision, WolfWrath then blasts the young Star Warrior away. He then lunges at Kirby, but Meta Knight intercepts the attack. At first, WolfWrath was annoyed by the interference, but then after a closer look, it recognizes the interloper as the one who defeated it all those years ago. Remembering its strong grudge, Wolfwrath is fueled with rage, immediately making the veteran Star Warrior its new target. Sword and Blade arrive to help, but Meta Knight orders them to protect Kirby no matter what while he dealt with WolfWrath alone. As the duo escort Kirby and his friends to safety, Meta Knight proceeds to standoff against his longtime rival, stating that this encounter will be different from the last, as only one of them will survive. They then clash, with WolfWrath forcing Meta Knight on the defensive with his claws, then launching a barrage of fireballs on his opponent. Dedede watches and is extremely angry that WolfWrath is fighting Meta Knight instead of Kirby, but Customer Service assures them that WolfWrath is powerful enough to defeat a whole army of Star Warriors. As Sword and Blade hide Kirby and Co. inside a closet, Meta Knight and WolfWrath continue their battle inside the castle. They offer to takeover, but Meta Knight orders them to stay back. The two combatants then lunge at each other for one final strike. Afterwards, WolfWrath runs off and Meta Knight collapses due to being paralyzed by a tooth lodged in his forehead. His last request before passing out was for Sword and Blade to continue protecting Kirby, as he is their only hope of defeating the dangerous creature, as well as its creator.

They attempt to remove the tooth, but it would not budge. Determined to revive him, the duo resolve to slay WolfWrath themselves while the others kept Kirby safe. The duo search the entire castle for the creature; Sword intercepts it, but is overpowered and it escapes. WolfWrath then makes its way into the kitchen through the vents and causes a fire in order to feed off of for energy. Sword and Blade find it, but they are too late as WolfWrath regains its strength and unleashes its flames on them. The duo are nearly killed, but Kirby arrives to save them by sucking up the smoke and blowing it away. After recovering, Tiff chastises them for going in recklessly and failing to uphold their promise to Meta Knight to protect Kirby. Sword and Blade feel ashamed by this and recount how they met Meta Knight when he saved him from the monster. Just then, a cloud of smoke appears as WolfWrath sets the entire castle on ablaze to re-energize itself. Meanwhile, Dedede grows argumentative and impatient for his guards capturing WolfWrath, but then looks at the monitor and sees his entire castle going up in smoke. When Dedede demands an explanation for this, Customer Service then remarks on WolfWrath's need to feed on fire, so the king has a change of heart and wants him driven out of the castle. As the Waddle Dees try to put out the fire, WolfWrath is irritated by all the water and resolves to escape. As it tries, Sword Knight and Blade Knight try to fight it in the courtyard but are unable to hit the powerful wolf. Kirby then grabs the Galaxia sword from Meta Knight's sheath and rides on the Warp Star, forcing it to retreat and Sword and Blade to give chase.

WolfWrath runs until it reaches a lake. As Sword and Blade arrive, WolfWrath launches a barrage, but they evade them all and corner it. Seeing it will fall in the water if it continues to fight like it did years ago, it flees. Just then, Kirby appears and strikes at WolfWrath with Galaxia, but the monster deflects it. Kirby then sucks up Galaxia and becomes Galaxia Kirby. WolfWrath tries to shoot down Kirby, but then the Star Warrior forces him to dodge, causing him to accidentally drop its foot in the lake. As it writhes in pain, Sword and Blade then remember how WolfWrath was defeated the first time and realize that water is its weakness. Kirby continues to attack, but WolfWrath shoots him out of the sky, briefly stunning him. Sword and Blade then try to fight WolfWrath into the lake. This proves difficult, but with Blade managing to stab WolfWrath in its scarred foot, they eventually succeed in dragging the creature into the water. Kirby comes to and sees WolfWrath becoming scarred and weakened with Sword and Blade struggling to keep it from leaving the lake. Seeing a chance to end the fight, Kirby gets on his Warp Star and reaches the necessary height to do so. WolfWrath manages to shake off the knights, but it is too late. Left weakened and defenseless, WolfWrath was helpless as Kirby unleashes his devastating Sword Beam attack. With its final breath, WolfWrath sends out one last fireball at its enemy, but the swordbeam cleaves right through it and the monster itself, causing WolfWrath to split in half and perish in a massive explosion.

Thanks to the duo's quick thinking, Galaxia Kirby is able to slay the evil WolfWrath. With the wolf destroyed, Meta Knight recovers from his paralysis and everyone enjoy an impressive celebration.

WolfWrath is a fuchsia wolf with gold eyes that have lavender markings under them. He has a glowing green gem encrusted on his forehead, a brown nose, pointy ears, and a lavender mane. He also has six large pink spikes protruding out of his back and thick, sharp claws. He is mainly quadrupedal, but has shown to be able to walk upright like a human. Electricity is also shown to course through his spikes on his back as well.

Like any monster produced by Nightmare Enterprises, WolfWrath is vicious, aggressive, bloodthirsty, and destructive. Unlike the other monsters, however, WolfWrath does not seem to follow orders from anyone, attacking everyone and everything it sees. Despite this flaw, WolfWrath understands the missions imposed on it and will not rest until its target is slain. However, it also knows how to keep a deadly grudge from past battles, as when it encountered Meta Knight again, it immediately went after him instead the intended prey. Being a fire monster, it instinctively creates fires to feed on and stays away from any water it comes across.

WolfWrath is one of the most powerful and vicious monsters that Lord Nightmare has ever created, being able to go toe-to-toe with the extremely skilled Meta Knight and survive the great war between the Star Warriors and Nightmare Enterprises. WolfWrath is a fire-based monster, with the power launch to shoot powerful and destructive fireballs from his mouth that can be fired in rapid succession and can also launch a stream of powerful flames from his mouth as well. It has razor-sharp claws to rip its opponents to shreds, and is skilled enough to clash with experienced sword-fighters like Meta-Knight. Its teeth are also capable of paralyzing his foes when lodged into them. WolfWrath also has heat vision to see through smoke and even solid walls. He is also shown to be very strong in terms of strength, being able to break though the castle walls with ease. When he finds his target, WolfWrath's eyes and the green gem on his forehead briefly glow at the same time. WolfWrath also runs extremely fast, and is intelligent enough to travel in the ventilation system to get to places, or ambush its prey from atop a cliff.

Being a creature of fire, his fatal weakness is water. Any contact with it will weaken WolfWrath and if put into a large body of it, he will become vulnerable to a finishing move, such as the sword beam. Also, Wolfwrath needs to continually set fires to feed off of in order to energize itself again for its next assault. 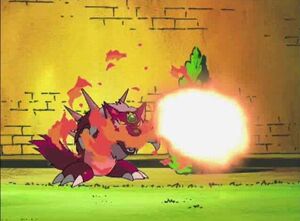 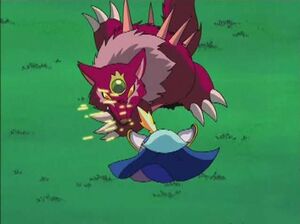 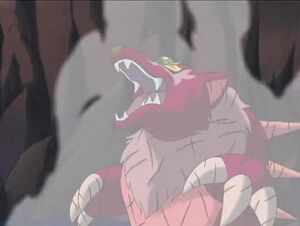 WolfWrath's death.
Add a photo to this gallery

Retrieved from "https://villains.fandom.com/wiki/WolfWrath?oldid=4042579"
Community content is available under CC-BY-SA unless otherwise noted.