Slaughter every sheep on the farm (failed).

Have Chirin defeat him in battle (succeeded).

The Wolf, also known as Woe or the Wolf King, is the deuteragonist and main antagonist of Takashi Yanase's children's book Chirin no Suzu, and its 1978 anime film adaptation Ringing Bell. He lives in the mountains surrounding the farm and kills his prey based on the belief that he must continue the cycle of nature. When Chirin wanted to become his apprentice, he reluctantly agrees, unaware that he was doing it to become strong so that he would kill him, albeit he was responsible for killing Chirin’s mother.

The Wolf is depicted as a cunning and ruthless killer who loves to terrorize his victims. He speaks in a demonic voice and occasionally calls Chirin a pipsqueak. While not shown, it is implied that he does consume his victims after killing them. After killing Chirin's mother, he was annoyed by the idea of having Chirin as his apprentice at first, but he eventually gives in. It is mentioned in the book that he was always hated, so the fact that Chirin wanted to be a wolf warmed his heart.

He is also very strong for a wolf when he easily defeats a bear and has Chirin fight off bigger predators and even ram through a tree. His training with Chirin also made him very strong and turned him into a demonic and dangerous creature. When Chirin refused to kill the sheep, the Wolf was enraged and tried to teach him to kill sheep until Chirin impaled him with his horns. In his dying moments, the Wolf admitted he was grateful for Chirin defeating him, because he stated that the greatest thing a wolf can have is death in battle. It is implied that he may have raised Chirin to have him defeat and kill him and even exposed his chest during the final battle for Chirin to deliver the final blow. It is also implied that he was an old wolf and he was too weak to hunt his prey without Chirin's assistance.

The Wolf is an aging wolf with black fur and a red scar on his left eye. He also has claws and has a muscular build. He has gray eyes and does not move his lips while speaking, like Chirin as an adult.

The wolf lives in the mountains beyond the sheep farm and terrorizes the sheep. On a windy night, the sheep begin to hear the yelps of the guard dogs outside the barn and the Wolf breaks in and starts attacking the sheep. He kills one sheep until he spots Chirin. He lunges at Chirin, but his mother doves over and protects him. The Wolf kills her and then leaves. Chirin cries over the loss of his mother and sets out of the farm to avenge his mother's death. He eventually finds the Wolf and confronts him, but the Wolf swings him off a cliff with his tail. Chirin tries to get back up, but he falls off. Chirin recovers from his injuries however.

The next morning, he finds the Wolf and offers to become his apprentice, but the Wolf isn't interested in the idea. He walks away and decides to take a nap. Chirin confronts him and the Wolf orders him to go back to his home, so he can have him for dinner. Chirin tries to prove his point to the Wolf, but is easily defeated by his prey. The Wolf defeats a bear and slaughters a deer to prove his point to Chirin, but Chirin still refuses to go back. Chirin follows him, but he eventually falls into a river and seemingly drowns.

The following night, Chirin finds the Wolf and says that he will continue following him no matter what. The Wolf once again leaves Chirin, leaving him to wander aimlessly across the wilderness until he finds a snake confronting a bird. Chirin fends the snake off, but accidentally ends up breaking the eggs. The Wolf finds him and tells him that killing for survival is the law of nature. Chirin is worried that he may not survive and become strong like him, but the Wolf tells him that he can grow fangs and agrees to train him.

Over the course or his training under the Wolf's tutelage, Chirin's features gradually become monstrous that he eventually developed into a beast-like ram. Atop the rocky mountains, Chirin tells his master that, though he once plotted to kill the wolf, he now has a deep respect and admiration for him, even seeing him as a father figure. Overtaken by a peculiar form of Stockholm Syndrome, Chirin is now completely loyal to the Wolf King.

Chirin's final test is to return to his birthplace, and help the Wolf King slaughter the sheep, in which he killed the dogs that are guarding the barn. By the time he completed the deed and catch up with the Wolf however, he is reminded to his own past upon the sight of the Wolf threatening a lamb which is protected by his mother. The Wolf confronts him and tries to teach him how to kill sheep, but Chirin fights back and impales him with his horns. In his dying moments, the Wolf admitted that the greatest thing a wolf can have is death in battle and that he is grateful of Chirin before he collapses to the ground.

Even though Chirin saved the flock from the Wolf, they ostracized him out of fear, due to his monstrous appearance and Chirin forced to return to the mountains. Chirin then sees a reflection of the Wolf in the pond and turns around, but realizes he's alone and lets out a cry of sorrow as he realizes that he has no home. 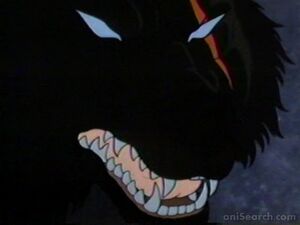 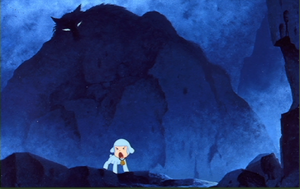 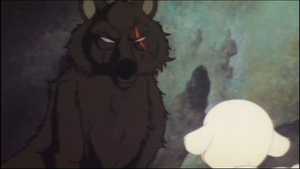 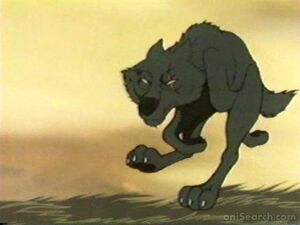 The Wolf chasing his prey. 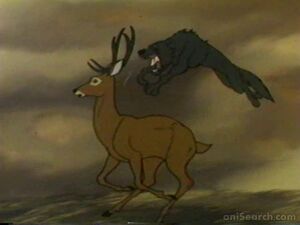 The Wolf ambushing a deer. 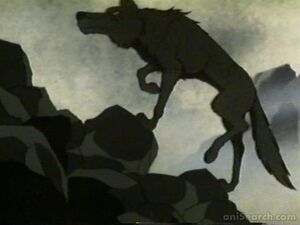 The Wolf climbing up a rocky hill. 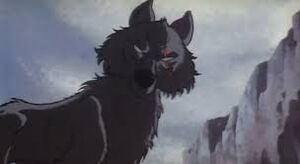 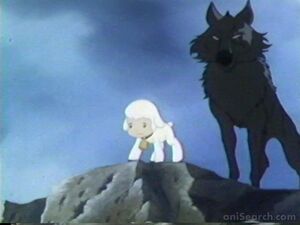 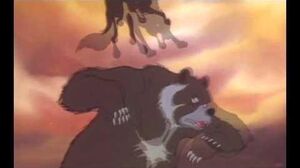 Chirin no Suzu - Bears Don't Sound Like that
The Wolf's fight with a bear. 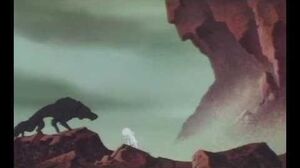