Eat Mrs. Sheep (in Lambert the Sheepish Lion, both failed)

The Wolf is the main antagonist of Peter and the Wolf and Lambert the Sheepish Lion. He was represented by the French horns in the musical story.

His vocal sound effects were provided by the late Jimmy MacDonald.

Peter and the Wolf (original symphony)

The wolf is the main antagonist of the symphony Peter and the Wolf. In the middle of the story, The Grandfather mentioned that a wolf might come out of the forest, because the meadow is a dangerous place. No sooner had he and his grandson gone, the Wolf came out of the forest. A Cat climbed up a tree near the cabin, because it saw the wolf. A Duck jump out of the pond and the Wolf chased it, until finally he caught it. And with one big gulp, he swallowed it. He walked round and round the tree looking at a bird and the cat. He saw a boy named, Peter command the bird to distract him. While the bird distracted the Wolf, Peter caught the wolf by the tail, and pulled him. The Wolf tried to get loose, but Peter tied the other end of the rope to the tree, and the Wolf's jumping mad the rope tied to his tail even tighter. Peter, and a squad of three hunters took the Wolf to the zoo. Everyone could hear the Duck quacking inside the the Wolf, because the Wolf in his hurry had swallowed her alive.

Peter and the Wolf

The wolf appears in the segment Peter and the Wolf, once again as the main antagonist. He appears when Peter, Sasha, Sonia and Ivan come to hunt him. When he appears, he scares Ivan, and chases Sonia, where he supposedly eats her. Peter and his animal friends fight against the wolf and with the help of some hunted who were called for help by Sasha, the wolf is tied and defeated. It is later revealed that Sonia managed to survive, and when the wolf is carried away, she and Sasha went to join the parade as the short ends.

In Lambert the Sheepish Lion, the wolf returns once again as the main antagonist. In this short, he tries to eat Mrs. Sheep, Lambert's adoptive mother. When he hears Lambert roaring at him for attempting to eat the lion's mother, he drops his vicious streak and becomes incredibly cowardly (to the point of running for cover) and emits Goofy's trademark yell when he is pushed off a cliff by Lambert. The narrator also shows sympathy for the wolf when he points out that the wolf clung onto a berry branch during his fall and that he wouldn't starve, making the wolf seem more pitiful than threatening.

Being a wolf animal, The Wolf is very ravenous towards his prey. He wastes no time when it comes to getting a hold of his victims. Seeing his prey makes him drool waterfalls of saliva and has a very skinny build, implying that it's not often he's able to successfully capture a meal. The Wolf is willing to do whatever it takes to capture his victims, even going so far as to swim through ice water in an attempt to catch the duck. 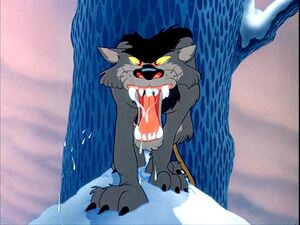 The wolf in the Make Mine Music segment Peter and the Wolf. 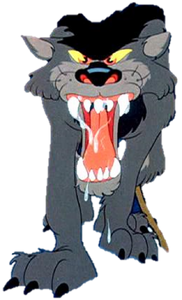 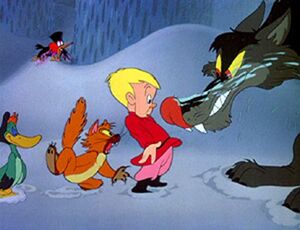 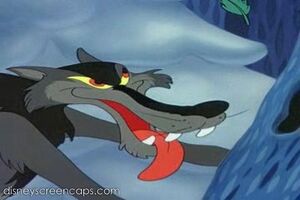 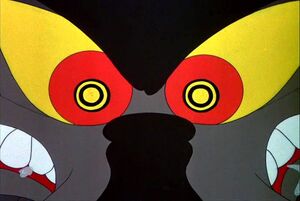 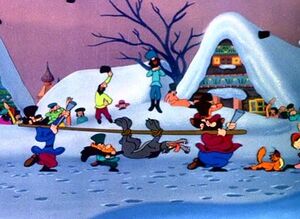 The wolf's defeat in Peter and the Wolf. 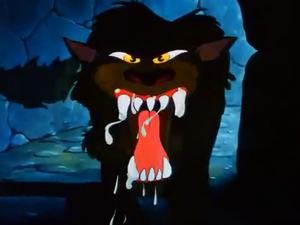 The wolf in Lambert the Sheepish Lion. 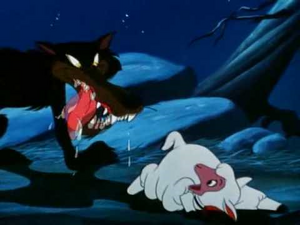 The wolf about to eat Mrs. Sheep. 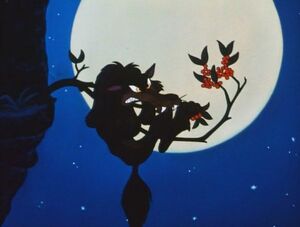 The wolf's defeat in Lambert the Sheepish Lion.