Captain of the Ghost

Manipulating and killing his crew members.

Wolf Larsen is the main antagonist of Jack London's 1904 psychological adventure novel The Sea-Wolf, and the 1941 film of the same name.

He is the captain of the Ghost. The Ghost and its crew are engaged in the vicious task of hunting seals and Wolf seems particularly apt for such missions. Wolf is a materialist in the truest sense of the word: anything that it is materially existent is of little use to him. This includes concepts like morality and ethics. He is fierce, driven and verging on downright evil; a brutally autocratic master of ship and crew. At the same time, however, Wolf proves himself just a fiercely independent and courageous and ultimately it is this side of his demonic personality that earns the respect of the narrator of the novel. He is also the brother of Death Larsen.

Van Weyden describes Larsen as beautiful on more than one occasion, perfectly symmetrical, a perfect specimen of masculinity. Yet, despite this, his true strength is described as something more primal, more primitive, and animalistic. He is extremely intelligent, having taught himself a variety of fields, including mathematics, literature, science, philosophy, and technology.

Larsen displays characteristics of a sociopath. He has absolutely no qualms about manipulating and bullying people to better serve his needs. He routinely takes men hostage, castaways such as van Weyden and seal hunters from other ships, and uses them to fill his own ranks when needed. He murders and abuses people without hesitation, seeing no value in life. He enjoys the intellectual stimulation that van Weyden and Miss Brewster provide, but van Weyden describes their relationship as one between a king and his jester. According to van Weyden, he is only a toy to Larsen.

Despite his immense internal strength, Larsen at times shows signs of weakness and depression. He is envious of his brother, because his brother is simple minded, and so is able to enjoy life unburdened. He also claims he is envious of Miss Brewster's and van Weyden's faith, but later says it is only his mind, and he knows he is better off without it. He also speaks of frustration that he never amounted to anything great. He claims that he had all the determination and will required, but was never given the proper opportunity.

Wolf is not Larsen's real given name. His genuine given name is never revealed. Dialogue heavily implies that he is called "Wolf" because of his nature and viciousness, and, for similar reasons, his brother is called "Death".

The story starts with Humphrey van Weyden aboarding a San Francisco ferry, called Martinez, which collides with another ship in the fog and sinks. He is set adrift in the Bay, eventually being picked up by Larsen. Brutal and cynical, yet also highly intelligent and intellectual (though highly biased in his opinions, as he was self-taught), he rules over his ship and terrorizes the crew with the aid of his exceptionally great physical strength. Van Weyden adequately describes him as an individualist, hedonist, and materialist. Larsen does not believe in the immortality of the soul, he finds no meaning in his life save for survival and pleasure and has come to despise all human life and deny its value. Being interested in someone capable of intellectual disputes, he somewhat takes care of Van Weyden, whom he calls 'Hump', while forcing him to become a cabin boy, do menial work, and learn to fight to protect himself from a brutal crew.

A key event in the story is an attempted mutiny against Wolf Larsen by several members of the crew. The organizers of the mutiny are Leach and Johnson. Johnson had previously been beaten severely by Larsen, and Leach had been punched earlier while being forced to become a boat-puller, motivating the two. The first attempt is by sending Larsen overboard; however, he manages to climb back onto the ship. Searching for his assailant, he ventures into the sleeping quarters, located beneath the main deck, the only exit being a ladder. Several, at least seven men, take part in the mutiny and attack Larsen. Larsen however, demonstrating his inhuman endurance, strength, and conviction, manages to fight his way through the crew, climb the ladder with several men hanging off him, and escape relatively unharmed. Van Weyden is promoted as mate, for the original mate had been murdered. Larsen later gets his vengeance by torturing his crew, and constantly claiming that he is going to murder Leach and Johnson at his earliest convenience, being the hunting season is done, as he can't afford to lose any crew. He later allows them to be lost to the sea when they attempt to flee on a hunting boat.

During this section, the Ghost picks up another set of castaways, including a poet named Maud Brewster. Miss Brewster and van Weyden had known each other previously—but only as writers. Both Wolf Larsen and van Weyden immediately feel attraction to her, due to her intelligence and "female delicacy". Van Weyden sees her as his first true love. He strives to protect her from the crew, the horrors of the sea, and Wolf Larsen. As this happens, Wolf Larsen meets his brother Death Larsen, a bitter opponent of his. Wolf kidnapped several of Death's crew and forced them into servitude to fill his own ranks, lost previously during a storm. During one of Wolf Larsen's intense headaches, which render him near immobile, van Weyden steals a boat and flees with Miss Brewster.

The two eventually land on an uninhabited island, heavily populated with seals. They hunt, build shelter and a fire, and survive for several days, using the strength they gained while on the Ghost. The Ghost eventually crashes on the island, with Wolf Larsen the only crew member. As a revenge, Death Larsen had tracked his brother, bribed his crew, destroyed his sails, and set Larsen adrift at sea. It is purely by chance that van Weyden and Miss Brewster meet Larsen again.

Van Weyden obtains all of the weapons including firearms left on the ship, but he cannot bear to murder Larsen, who does not threaten him. Van Weyden and Miss Brewster decide they can repair the ship, but Larsen, who intends to die on the island and take them with him, sabotages any repairs they make. After a headache, Larsen is rendered blind. He feigns paralysis and attempts to murder van Weyden when he draws within arm's reach but just then is hit with a stroke that leaves him blind and the right side of his body paralyzed. His condition only worsens; he loses usage of his remaining arm, leg, and voice. Miss Brewster and van Weyden, unable to bring themselves to leave him to rot, care for him. Despite this kindness, he continues his resistance, setting fire to the bunk's mattress above him.

Van Weyden finishes repairing the Ghost, and he and Miss Brewster set sail. During a violent storm, Wolf dies. They give Larsen a burial at sea, an act mirroring an incident van Weyden witnessed when he was first rescued. 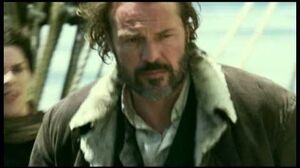 SEA WOLF "Wolf shows the crew how he deals with mutiny"