Destroy Corneria and conquer the galaxy (Starlink: Battle for Atlas).

Wolf and his team had always had a long-standing grudge against Star Fox and Wolf himself was believed to have had had a hand in the death of Fox's father, James. Eventually Star Wolf was hired by Andross to deal with Star Fox, which Wolf was only too happy to do. They first engaged Fox and his team when they were sent in to defuse a bomb planted on Fichina. While Star Fox was able to easily deal with Andross' forces, Wolf and his team quickly engaged them, distracting them from dealing with the bomb. If the player successfully took out the members of Star Wolf, Wolf was beaten and he swore revenge on Fox. If the player failed to do so, Wolf cackled in victory and flew off to collect his team's payment from Andross. Afterwards, Star Wolf was sent to protect Boise, a defense satellite for Venom. Wolf and his team engaged Star Fox in another dogfight, but failed to protect the satellite and were left injured from the fight. They were given one last chance and given upgraded ships, the Wolfen II, to defend Andross' base from Star Fox. However Wolf and his team were shot down and finally defeated, forcing him to go into hiding in his hideout, the Sargasso Space Zone.

Some time later, Star Fox headed into Wolf’s hideout, trying to find Pigma Dengar. However Wolf had kicked Pigma off of his team, tired of the pig's greediness and his own inability to trust him, ordering his soldiers to shoot Pigma on sight. While Wolf was at first interested only in taking down Fox, he was forced to forget his goal so as to deal with the Aparoids, who posed a threat to all of them.

Star Wolf aided Fox and his team in fighting the Apariod threat and Wolf even rescued Fox when he was ambushed in Corneria City. However he refused to admit this, saying that Fox had just been lucky enough to jump on his ship's wing. Eventually Wolf did admit that he'd purposely saved his rival, wanting to finish him personally. Soon afterwards, Wolf encouraged Fox in his fight against General Pepper under the control of the Aparoids, telling him that when it came to a tough decision, not to hesitate, just act. Finally, Star Wolf aided Star Fox in their attack on the Aparoid Queen with Wolf and his comrades distracting the Aparoids while Fox moved ahead, an act that seemed to be sacrificing themselves. However Wolf and his team managed to survive.

Wolf and his team, who were believed to have died in the Aparoid invasion, soon found themselves dealing with the massive bounty on their heads. Eventually Fox caught up with them and Wolf was defeated in a fight with him. Fox asked for his help fighting the Anglar forces and he begrudgingly agreed, though he asked if he would be paid or not. During this time, Wolf continued his rivalry with Fox, though demonstrated some respect for him. After the Anglar Emperor was stopped, Wolf scolded Fox for taking his prey, since the chances of getting rid of the bounty on him was gone. Fox revealed that he was getting rid of Wolf's bounty. However in an alternate ending, Wolf and his team led the charge in the assault on the Anglar Emperor, leaving Fox behind. Star Wolf would become heroes to Lylat, getting their bounties taken off and even receiving reward money.

Wolf has a cameo appearance in the opening of Super Smash Bros. Melee.

Wolf is a secret character who can be unlocked in Super Smash Bros. Brawl by playing 450 Vs. matches, beating Boss Battle Mode as either Fox or Falco, or by having him join the player in the Subspace Emmissary. Most of his moves are based off of Fox and Falco, but are used differently. This makes Brawl the only game in the series to have Wolf as a playable character, before Ultimate.

Wolf did not return as a playable character in Super Smash Bros. for Nintendo 3DS/Wii U; though he does appear at least as a trophy in both versions of the game. Fox also has Wolf's "Wolf Flash" from Brawl as a custom special. Fox also has a palette swap that resembles Wolf's design from Brawl.

Following the fact that every previous character who has appeared in the franchise makes an appearance as a playable character and returns to the roster, as well as nine new characters appearing, Wolf is no different. His moveset does not seem like it has changed much, if at all. However, his design certainly has changed, now based on his Star Fox Zero appearance. He is now wearing a pink leather jacket, and seems to have an almost permanent smug smile on him. His return has been generally well-received, as a lot of fans were disappointed when he didn't return for the WII U/3DS installment, despite people requesting that he returns.

Wolf appears in the Nintendo Switch version of Starlink: Battle for Atlas as a antagonist.

Wolf is merciless, brutal and cunning, refusing to accept any form of authority, but still possessing the ability to gain loyalty from others. He does not do anything out of the goodness of his heart and only focuses on profiting for himself and his team. Wolf maintains a fearsome rivalry with Fox and is determined to one day kill him, but has a grudging respect for him. He also has little patience for anyone he feels he cannot trust.

Wolf is a skilled pilot, able to prove a challenging opponent for the Star Fox team. He pilots one of Star Wolf's signature Wolfen ships, which is similar to the Arwing. It is fast and maneuverable, using a pair of dual laser cannons for weapons, but has a weaker shield than Arwings. Wolf can also handle himself on foot, having high physical capabilities and the ability to wield various guns, though he seems to have a preference for the machine gun. 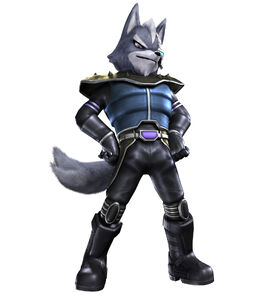 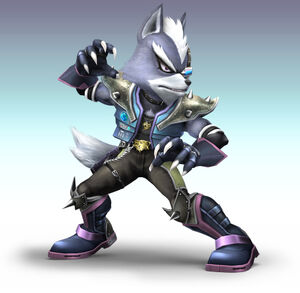 Wolf as he appears in Super Smash Bros. Brawl. 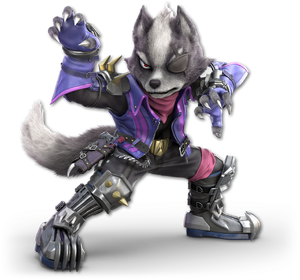 Wolf as he appears in Super Smash Bros. Ultimate. 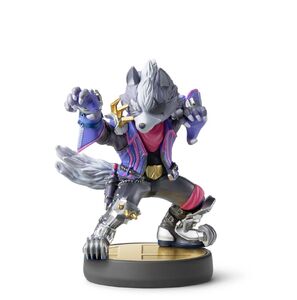 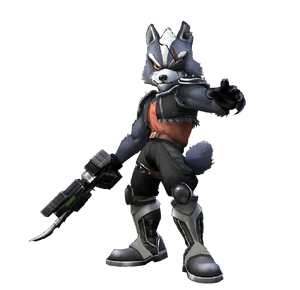 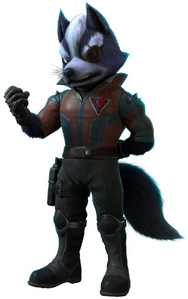 Wolf as he appears in Starlink: Battle for Atlas 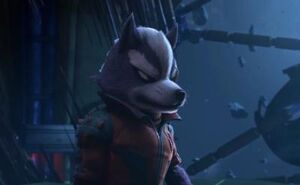 Wolf, seen at the end of a Starlink: Battle for Atlas Trailer. 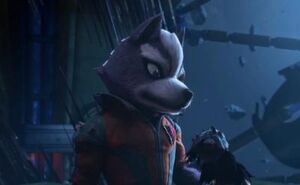 Retrieved from "https://villains.fandom.com/wiki/Wolf_O%27Donnell?oldid=2937305"
Community content is available under CC-BY-SA unless otherwise noted.