Wreaking havoc
Traveling to other dimensions to get more power

Kill all of the Spider-Men (nearly succeeded, but then backfired).

Become the ruler of all of the Spider-Verses itself (failed).

Wolf Spider is the main antagonist of the Return to the Spider-Verse arc in the fourth season of the 2012 Ultimate Spider-Man series. He is a villainous version of Peter Parker from another universe.

He was voiced by Christopher Daniel Barnes, who also voiced Electro in the same series and originally voiced Spider-Man in Spider-Man: The Animated Series.

Not much is known about Wolf Spider's past, although it can be assumed that, just like the original Peter Parker, he was bitten by a radioactive spider, but decided to use his new powers for evil rather than good. According to himself, he murdered every hero in his world, including Miles Morales.

He discovered the Siege Perilous when a shard of it fell into his world. Through the device, he found there were other universes where there were several heroic versions of himself. Wolf Spider sought to use it to conquer the other spider-verses and destroy his heroic counterparts.

In Return to the Spider-Verse Pt. 1, he used the shard to travel to the Vampire Universe and created a fake alliance with the Lizard King. He battled Blood Spider, Spider-Man, and Kid Arachnid in the sewers and stole the shard of the Siege Perilous. In the end, after the Lizard King was defeated and everyone was back to normal, he revealed himself to the duo and his plan. Wolf Spider tried to steal the two shards from them, but he failed and used the shard that he had to retreat to the next dimension.

During Return to the Spider-Verse Pt. 2, he doesn't physically appear but it is mentioned by Doc Ock Holiday that Wolf Spider tried to take the shard of the Siege Perilous from him. However, he was defeated by the corrupt sheriff and forced to flee to another dimension.

He appears in Return to the Spider-Verse Pt. 3, where he travels to the Noir Universe and tries to get Mr. Negative to join him should hand over his shard of the Siege Perilous. However, Mr. Negative fired at him because he was sick of more spider-themed people in his world. His offer refused, Wolf dodged the blast and opened a portal to another universe to find more shards.

Return to the Spider-Verse Pt. 4

Wolf Spider later appeared in Kid Arachnid's universe at the New York police department, where he and Spider-Man had already found the next shard. Wolf Spider revealed Kid Arachnid's mother as his captive and demanded the shard from them in exchange. Luckily, Spider-Man and Kid Arachnid freed Mrs. Morales from his grasp and are joined in by Gwen Stacy, the substitute for Miles during his absence in his world. During the battle, Wolf Spider removed his cloak, revealing four bio organic spider arms on his back, which he then used to fight them on. As Kid Arachnid assaulted him, the shard he had showed him turned out to be the final piece that Wolf Spider used to guide himself. This final piece joined together to recreate the Siege Perilous. As the heroes escaped, they left Wolf Spider to the authorities, led by Captain George Stacy, but he quickly managed to elude them.

Later, when Kid Arachnid rejoiced in his dimension, Wolf Spider broke into his family apartment and took the Siege Perilous from Spider-Man. As Miles asked him how he knew where he lived, Wolf Spider explained that his dimension also had a Miles Morales that he killed and promised to do the same to this Miles before knocking him out. Spider-Man called him out on his move, stating he doesn't care who Wolf thinks he is but Wolf stated he would soon. He then removed his mask, revealing his identity to them as the only evil Peter Parker in all of the realities. He seized the completed Siege Perilous and voiced his motives to take over all reality, before leaving the area.

As the trio followed him, they discovered that he left a trail of destruction behind him that leads to an underwater cave. Once they found him there, they witnessed him draining the life force from all the alternate Spider-Men, causing him to grow stronger. Gwen and Kid Arachnid took Wolf Spider head on, but ended up having their powers drained from them as well. As Spider-Man was the last one standing, Wolf stated he wanted to make sure to end Spider-Man because the Multiverse appeared to revolve around him no matter how many times the he used the Perilous and it led him to Spider-Man. Hearing this, Spider-Man asked Wolf Spider if he drained the powers of all the Spider-Men, to which Wolf Spider replied "every last one." With that said, Spider-Man seemingly allowed Wolf Spider to drain his energy. However, once Wolf Spider believed he succeeded in his goal, he soon witnessed all the alternate Spider-Men disappear before him.

As his body then began to shatter, Spider-Man revealed to him that he poisoned himself with the life forces of every spider hero there is in existence, forcing Wolf Spider to return their powers as he was destroyed.

Wolf Spider was first seen wearing a dark hooded cloak over his body and a goggled mask over his face that was hiding his true identity. As he revealed himself to Spider-Man, he wore a dark blue jumpsuit and had four robotic spider arms on his back, sharing similarities to Iron Spider. His physical appearance looks similar to that of Peter Parker, except he has darker hair, grey skin and red eyes.

Wolf Spider is a ruthless villain who doesn't really care about anyone else, not even his dimensional counterparts. He is only obsessed with getting more power and ruling worlds. He often pretends to join other villains who have shards of the Siege Perilous, only to help him further his goals. However, he appears to know when to retreat as he did so with Doc Ock Holiday and Mr. Negative. He also considers heroism and responsibility to be "pathetic" ideals and will destroy anyone who uphold to them, including his counterparts. While hating all his counterparts, Wolf Spider has a strong particular hatred for the Ultimate Spider-Man, as he voiced resentment of him being the center of the multiverse.

Overall, Wolf Spider is a heartless monster obsessed with getting what he wants while being the opposite of everything Spider-Man stands for. He is selfish, mean, reckless, and lacks any morals. He also wants to be the center of attention as indicated above with his overall petty reasoning for hating Ultimate Spider-Man the most. 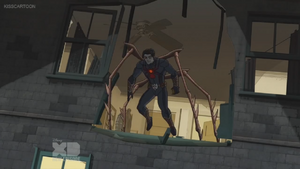 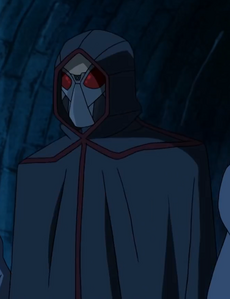 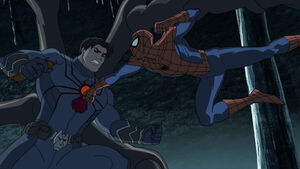 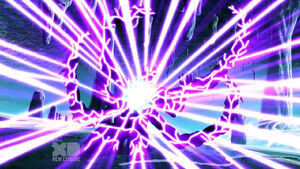 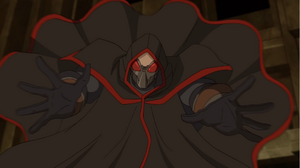 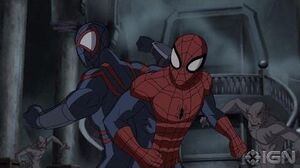 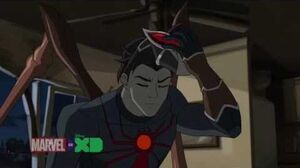