Hunting with his pack.

Break out of Saturn Six.

The Wolf of Saturn Six is a minor antagonist in the MMO third person shooter Warframe. He acts as the titular antagonist of the first Nightwave series.

He is the escaped convict of a Grineer maximum security prison called Saturn Six, who escaped to rescue and avenge his fellow inmates from Corpus experiments.

While his series was active, he would randomly invade missions as a mini-boss and attack everything in sight, the chances of this happening increasing as the series went on. After episode 3 he would be accompanied by three Saturn Six fugitives, and became significantly stronger following episode 4. Defeating him yielded a chance of him dropping the parts for players to build his hammer.

The Wolf of Saturn Six is remarkably tall and muscular even in regards to other heavy units. He's clad in heavy custom armor with black and dark brown coloration and occasional white markings and a face-concealing helmet that also covers one of his eyes, and wields a large hammer known as the "Wolf Sledge". From what little we see of it, his face seems to be mostly wrapped in bandages.

After his hybridization with a Sentient strain, he wears a white and brown faceplate over his helmet.

While the Wolf himself never speaks, only letting out an enraged howl whenever he appears, his actions show him to be very compassionate and protective of his fellow inmates. His violent behavior is reserved exclusively for those outside of his pack and especially those who threaten it. Even when he finally had the man who sold them away in his grasp he didn't kill him for revenge, but to protect them.

The Wolf used to be a model prisoner simply sitting off his sentence inside Saturn Six, a Grineer maximum security prison that got its name from its isolated location deep in the atmosphere of Saturn. He formed a close friendship with his fellow inmates, whom he considered his "pack" and even became Warden Gharn's favorite.

But when he discovered that the warden had been selling some of his pack members off to the Corpus to be experimented on, he started a brutal prison riot that left Saturn Six in ruins and escaped with his fellow inmates. He traveled the Solar Rail to the industrial Corpus Gas Cities on Jupiter and hijacked one of the stations, sending a message to the entire Origin System demanding that Warden Gharn be handed over to him. He and his pack then traveled from city to city, freeing the members still held captive.

Some time later, he received an anonymous answer: "GHARN IS YOURS." The message led him to the place where Gharn was handed over to him. The Wolf killed him, not for revenge but to simply stop his pack from being sold again. But it was a trap. The Wolf and his pack were captured by Alad V and themselves used for his experiments. He hybridized them with Sentient DNA, took control of them and sent them to hunt down the Tenno. Unfortunately for Alad V, the experiments made the Wolf stronger and smarter, too much to control. He broke free, rescued his comrades and left Jupiter for good.

During the Wolf Hunt event at the end of the series, the Tenno tracked the Wolf of Saturn Six to a galleon he used as a hideout. After storming the ship and defeating him, the Wolf was seemingly silenced for good. 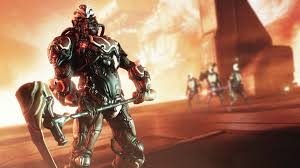 The promotional image for the "Wolf Hunt" event. 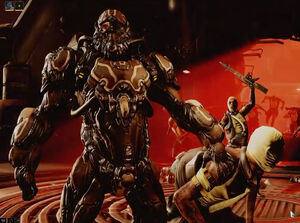 The Wolf and his pack after breaking out of Saturn Six. 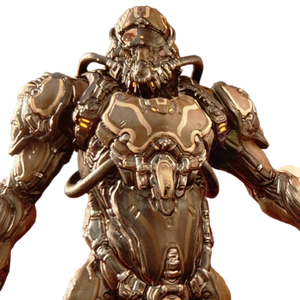 The Wolf before his hybridization.
Add a photo to this gallery

Retrieved from "https://villains.fandom.com/wiki/Wolf_of_Saturn_Six?oldid=3879204"
Community content is available under CC-BY-SA unless otherwise noted.