"On second thought, if the Queen wants Skylands she can have it for now but the future… that's all mine."

- Wolfgang to the Skylanders at the Clock of Skylands

No information
Wolfgang is the secondary antagonist and a trappable villain in Skylanders: Trap Team. An Undead element trap is required to trap him.

At first glance Wolfang appeared to be just another one of the Golden Queen's servants albeit an easily irritated and short-fused one. However at the Clock of Skylands Wolfgang reveals his megalomania by planning to travel to the future to conquer it.

Once does he travel 10,000 years in the future, Wolfgang becomes a dictator and the Emperor of Skylands. Despite his enthusiasm of destroying the Skylanders in the past before their final confrontation at the Big Bad Woofer Wolfgang proposed an alliance between them as they could easily rule the future together however he then quickly dismisses this idea and th two battle.

In the past Wolfgang did show concern for his fellow Doom Raiders when the Chompy Mage and Gulper were captured however at the Wilikin Workshop he had no qualms about leaving Doctor Krankcase for his inevitable capture.

Wolfgang wasn’t always a werewolf. He was once a handsome, brilliant musician set to marry a beautiful princess. Before the wedding, he planned to unveil his ultimate symphony to the greatest music aficionados in Skylands, convinced they would love it and instantly hail him as the best composer of all time. But they didn’t. They hated it – and even worse, it actually physically hurt when heard. Turns out Wolfgang had unintentionally discovered the musical note for pain. Being shunned like this drove Wolfgang utterly and completely mad, physically transforming him into the werewolf he is today. With the princess no longer wanting to marry him, he turned to a life of crime, terrorizing the royal subjects and using his evil music as a weapon. The Golden Queen took note of this and realized that Wolfgang could make a powerful ally, if she could control his rage and keep him in line. And that’s a pretty big "if!" 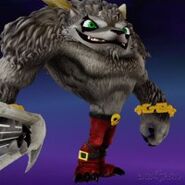 Evolved Wolfgang.
Add a photo to this gallery
Retrieved from "https://villains.fandom.com/wiki/Wolfgang_(Skylanders)?oldid=1217995"
Community content is available under CC-BY-SA unless otherwise noted.