Proficient in all forms of gambling

Find a strong opponent to fight.

Wolfgang Krauser is the main antagonist from Fatal Fury 2.

Krauser was the son of a man who married the last descendant of the traditional Stroheim family, thus becoming the Earl of Stroheim. His father had left a family in America to marry Krauser's mother. When Krauser was nine years old, a boy tried to murder his father with a knife, but Krauser stopped him and almost killed him, but spared him after learning that the boy was his half-brother, Geese Howard, who blamed his father for leaving his mother. Krauser always kept an eye on his brother, expecting to fight him again someday. Many years later, Krauser's mother died on the streets from sorrow, after learning that Rudolph still loved his old family. One day after her funeral; on his 16th Birthday, Krauser challenged his father. Although everyone thought that he would be easily defeated in a hand to hand combat, Krauser killed his father in a single blow, thus becoming the new Earl of Stroheim.

Krauser became a well known fighter, but had also secretly became a notorious and widely feared crime lord throughout Europe, known to those of the underworld as the "Emperor of Darkness". He was always served by Laurence Blood, who worked as his bodyguard. Krauser was challenged by many fighters, but none defeated him, such was Krauser's might. One day, he fought Jeff Bogard and Hanzo Shiranui, which he easily defeated. However, the two managed to strike him with a combined attack, which left a cross scar on his forehead. After this, people started to fear Krauser's might and nobody dared to challenge him again. Krauser eventually got bored and started to seek a worthy opponent.

Krauser learned about Southtown, eventually discovering about Geese Howard's reputation as the kingpin of the city. He then sent a letter to his half-brother, challenging him for a duel. However, Geese never answered the letter. Some time later, Krauser was informed that Geese was killed by a man named Terry Bogard. Familiar with that name, Krauser decided he would challenge Terry instead. He traveled to Southtown to host Geese's King of Fighters tournament, turning it into a worldwide tournament and inviting not only Terry but also fighters from all around the world. He then hired Billy Kane, a former henchman of Geese, to work for him, as well as the boxer Axel Hawk, along with Laurence Blood. Krauser watched the tournament progress, amazed by the many fighters and their skills, and while Terry defeated his lackeys, he decided to fight those who fought Terry before, easily beating all of them, leaving them severely injured and humiliated. Krauser then invited him to Stroheim Castle, where the final battle is set. Both of them fought with everything they had, and after a fierce battle Terry emerged victorious, and Krauser tasted defeat for the first time in his entire life. Krauser proceeded to take his own life, as revealed by Terry in Memories of Stray Wolves.

Krauser also appears in The King of Fighters series, where he is alive and well much like Geese in this continuity. After his previous defeat, Krauser instead disappeared and trained harder to restore his prestige. He had a cameo in the Fatal Fury/Italy Team ending in KOF'94, and first appeared as a main character in The King of Fighters' 96, forming the Boss Team along with Geese Howard and Mr. Big, having been invited by Geese. Geese eventually reveals his reason for joining the tournament was to investigate the mysterious Orochi power. Though Mr. Big feels used and betrayed, Krauser thanks Geese for giving him this opportunity to fight many strong fighters, leaving them to continue his training.

Krauser has occasionally made cameos in other SNK games, appearing as a background NPC character.

Krauser also appears as the main antagonist in the second Fatal Fury OVA, with slight changes to his appearance. Learning of Geese's defeat, he tracks down Terry Bogard and challenges him to a fight, beating him within seconds due to an injury Terry suffered earlier. This causes Terry to spiral into a self destructive depression, and Joe unsuccessfully tries to avenge Terry by challenging Krauser, which lands the champion kickboxer into the hospital. Terry eventually snaps out of it and travels to Germany to confront Krauser in his own castle, and after a brutal duel, Terry comes out victorious. Krauser proceeds to take his own life by falling out of the demolished castle and into the water below. The producers expressed their desire to have Krauser survive at the end, but SNK did not allow it since Krauser was deceased in the games.

Krauser is a very gentlemanly and honorable man. However, once he enters a fight, he becomes a brutal and aggressive fighter, who has no qualms in humiliating his opponents, believing mercy and morality have no place in a fight. 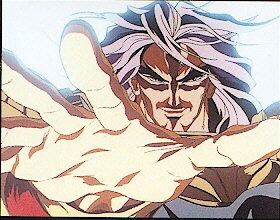 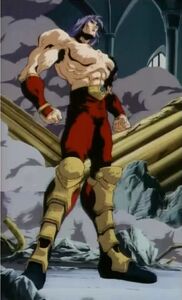 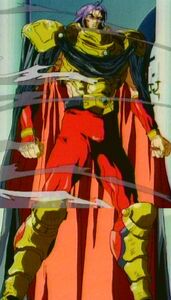 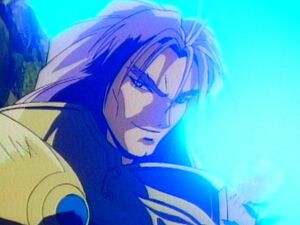 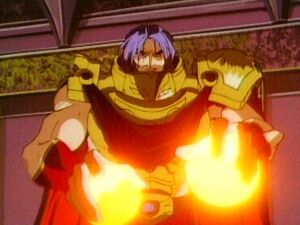 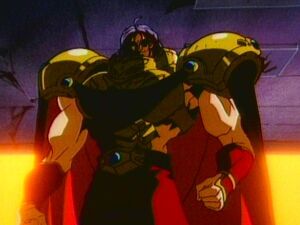 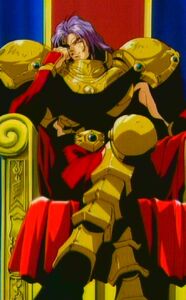 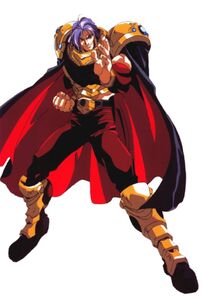 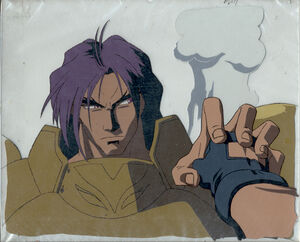 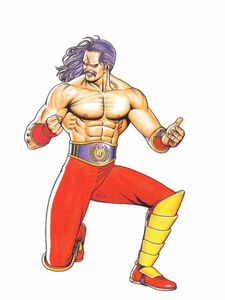 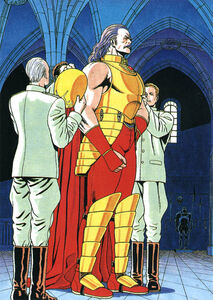 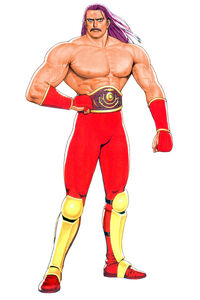 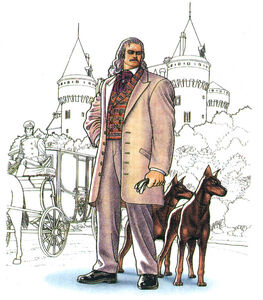 Young Krauser and Geese in The King of Fighters: Destiny.
Add a photo to this gallery

Retrieved from "https://villains.fandom.com/wiki/Wolfgang_Krauser?oldid=4207834"
Community content is available under CC-BY-SA unless otherwise noted.