The Wolfman, also known as Wally Fitzpatrick, is a one-time antagonist in the animated series, Dan Vs., before he became a background character as his true form. He is first discovered, when Dan finds three scratches on his car, fur, and paw prints near his apartment. He only appears during a full moon, and usually runs errands for himself (such as, getting himself tacos). The Wolfman in his human form is seen in later episodes.

Little is known about the Wolfman, considering in the episode, Dan and Chris spend most of their time finding him. Although it shows that he does jog (as suspected by Dan in the beginning), while Dan and Chris pursue him on Halloween. The Wolfman also seems to be obdurate and impervious to pain (except from silver), this is proven when Chris hits the Wolfman with his car, as the Wolfman seems to be in no pain at all. He also seems to like tacos, as shown when Dan prepares to shoot him with an arrow.

The Wolfman, is of course, a wolf who seems to be able to talk, and walk, although he wears sneakers. But in his human form, he's a bald, obese man, who wears glasses. It shows that he has a normal life, considering at the end, he's wearing a suit, carrying a briefcase. (He's for some reason, more fit while in his wolfman form.) 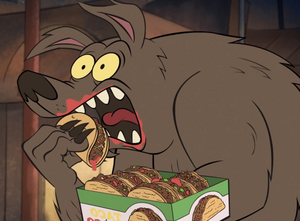 Add a photo to this gallery
Retrieved from "https://villains.fandom.com/wiki/Wolfman_(Dan_Vs.)?oldid=3563748"
Community content is available under CC-BY-SA unless otherwise noted.