Steal the Quirk Amplification Device (succeeded for a while; but then failed as the device was destroyed).

Kidnap David Shield in order to mass produce more Quirk Amplification Devices via black marketing.
Kill Izuku Midoriya and All Might (both failed).

Wolfram (ヴォルフラム, Vorufuramu) is the main antagonist in My Hero Academia: Two Heroes. Wolfram is a power-hungry terrorist who desires to steal David Shield's Quirk Amplification Device and kidnap him to create and mass produce more into selling them in a black market.

He is voiced by Rikiya Koyama in Japanese version and Keith Silverstein in English version.

Wolfram is a tall, bulky man with maroon hair and his eye pupils colored yellow. along with nearly dark patches extendedly across his right eye, some covering his mouth and nose. Even alongside a scar of his left cheek. He is also shown wearing a large white trench coat with gray cuffs and trimmings, along with combat boots, dark gray pants and a combat vest. His hands are covered with brown gloves and wears a metallic mask that covers his scars, when his Quirk Amplification Device is activated, Wolfram skin became luminescent pink, his body became more bulkier and her eyes are dark purple sclera with white pupils, he is accompanied headset.

But after the battle with Deku and All Might. Wolfram appears to be very skinny and skeleton-like (similar to All Might's true form), probably due to the Quirk Amplification Device destroyed.

Wolfram is an arrogant, sadistic, and greedy supervillain who is willing to do whatever it takes to gain more power than ever, like how he desires to take the Quirk Amplification Device for a black market and sell them to other villains to gain fame for his own selfishness.

He is shown to be very merciless when he was willing to shoot down Sam and David, including with attempting to murder Melissa. It even shows that Wolfram never keeps his promises when it comes to harming people.

He is also manipulative as he and his gang pretended to be actors in order to fool David and lied to him to take the device for himself.

He even seems to enjoy mocking David's redemption when he said that it was too late to be a hero when what David did was already a cause of villainy, leaving David to be in despair and was willing to cause him more misery and loss, when he then aimed his gun towards Melissa.

Nothing is known of Wolfram's past. But, he does reveal that before he began the staged invasion of I-Island, All For One contacted him unexpectedly, wanting to aid in his plans of his own volition (apparently just to torment All Might more, as his own friend was involved in it). Wolfram accepted his aid, which came in the form of him being granted a second Quirk, and unknown muscle/strength-boosting power.

Wolfram broke and entered I-Island and hacked into the security system, threatening to kill the inhabitants there. He also restrained all of the pro-heroes attending, including All Might and took David Shield and his assistant Sam hostage in order to break into the island's vault. The Class 1-A students and Melissa Shield plan to go to the 200th floor of the building that they were partying in to stop Wolfram's evil plans. Having lost their way to the party, Katsuki Bakugō and Eijiro Kirishima venture into the building without noticing the hack.

When the students reach the 80th floor, Wolfram and his team become aware of their plan and attempt to apprehend them. While hiding in a plant room, the group attempts to escape from two of the villains until Bakugō and Kirishima accidentally cross paths with them and engage in a battle with the villains. Todoroki helps others escape to a higher floor and joins Bakugō and Kirishima in their fight. Mineta uses his Grape Quirk to climb up the tower and lower a ladder to allow the others to climb up with him. Wolfram's men send an army of sentry robots after both groups of students, which incapacitate Kaminari. Iida, Yaoyorozu, Jirō, and Mineta defend against the robots while Midoriya, Uraraka, and Melissa make their way to the top of the tower.

Uraraka uses her Zero-Gravity Quirk to carry Deku and Melissa to the security room before the robots overpower her. Just in time, Todoroki, Bakugo and Kirishima save her. Deku and Melissa continue working their way to the top. they discover David and Sam in the vault as they unlock a suitcase. It is revealed that David and Sam orchestrated the night's events with actors in order to steal back their greatest invention - a headset that maximizes the power of a person's Quirk. I-Island's top men decided that it was too dangerous, so they took their invention and research away, and locked it up so it wouldn't end up in the wrong hands. Deciding that All Might needed it to remain a hero and keep the world safe, David decided to get his invention back. Wolfram arrives, restrains Deku, and reveals that he is a true villain and not an actor. Sam then betrays David and gives Wolfram the suitcase, revealing that he worked with Wolfram to make sure he could sell the invention to other villains and achieve fame. However, Wolfram shoots Sam after getting the suitcase and David jumps in the way of another bullet in order to save his life.

Before Wolfram can kill Melissa, Midoriya breaks free in order to fight him. Wolfram uses his Quirk to hold off Midoriya and escapes to the rooftop, having kidnapped David so he can make more copies of said invention. Deku races to the top and attempts to stop Wolfram from taking off in a helicopter with David, but fails and falls from the helicopter. Melissa also takes back control of the security system, freeing the pro heroes and disabling the robots. All Might, now freed, races to the roof and stops the helicopter from taking off.

Wolfram, in a last attempt to succeed, uses the Quirk-Amplification headset to amplify his power and starts to overcome an already tired All Might, creating a giant body made up of metal parts and debris that traps David inside it. He overpowers All Might further with multiple Quirks and reveals to him that he is in league with All For One, who gave Wolfram an additional Quirk and helped fuel David's fall from grace in an attempt to demoralize All Might. The rest of the students soon arrive on the roof to help All Might and Deku who work together to finish the fight. The two throw a smash together that is ultimately strong enough to defeat Wolfram, destroy the Quirk-Amplification device and free David.

It is unknown about Wolfram's fate afterwards, but is presumably that he was left alone in the destruction or arrested for their crimes alongside his gang.

Metal Manipulation: Wolfram's Primary Quirk. This quirk allows Wolfram to manipulate metallic objects by making physical contact with their surface. It was also used for defensive purposes in battle, like creating flexible pillars to crush its targets while it also makes sturdy walls to block enemy attacks.

Muscle Augmentation: A Quirk given to him by All For One. Muscle Augmentation can greatly increase Wolfram's muscle mass and stamina. It seems to be more simplistic and less extreme in power and appearance than either Muscular's Quirk or One For All's.

Leadership Skills: Wolfram has apparently solid and capable leadership of his gang, and they were efficient enough under his direction to be prepared for most possible resistance from their captives. His subordinates wee able to fight on par against Class 1-A's Students.

Tactical Skill: Wolfram is shown to be intelligent and strategic, as when he pretends to be a fake villain in order to steal David's Quirk Amplification Device.

Acting Skill: Wolfram, along with his gang, were able to pass themselves as a group of fake villains to hire, though the exact extent of their deception to David is unknown. 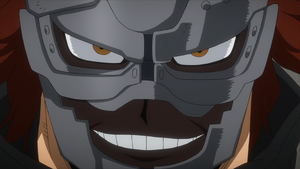 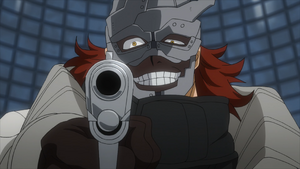 Wolfram dishonors the agreement with Samson, as he prepares to kill him. 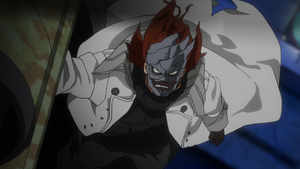 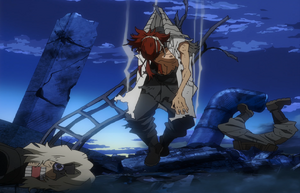 Wolfram after his device gets destroyed. 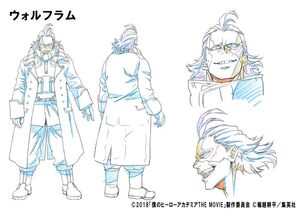