The Wolf, The Ram, & The Hart
Evil Incorporated

Angel season one episode "City Of"

Thosands of years ago

Wolfram & Hart is the name of an evil organization of lawyers in the Angel series who tend to only aid clients that are unmistakably evil: people such as mobsters, murderers, corrupt senators and a large number of demonic clients are set as a typical example of the people the organization defends regularly.

They are also a thinly disguised yet effective tool for a conspiracy to unleash the Apocalypse upon the world and were founded with aid from the Wolf, the Ram and the Hart - three demons that were considered weak in the pre-human age of Earth but left this realm long ago and set up Wolfram & Hart as a means to continue their nefarious ways on the earth-plane, now going under the name of the Senior Partners.

The firm is said to hold branches in every major city in the world but only the LA and Rome branches have been seen in the series - unsurprisingly since most of Angel is set around the LA area.

Wolfram & Hart are also very much an all-purpose evil organization and have "Special Projects" such as organizing charity events so as to steal 95% of the funds, hiring assassins to deal with threats to the Senior Partners and other highly illegal activities.

Despite this harsh rule higher-management in Wolfram & Hart are also shown to be capable of allowing favored employees to have a second chance if they feel merciful - though this is totally up to the manager and as such it is a highly hazardous company to be involved with, many employees end up killed or tortured in the line of duty.

Unlike other companies an employment at Wolfram & Hart does not end with death. It simply means your workplace changed to another dimension. Some high ranking employees have even been send back to our dimension in ghost form.

Also Wolfram & Hart have branches outside the mainstream dimension and may be present in multiple spheres of reality - though functioning differently in each. The LA branch of the organization was destroyed by Angel in the series finale and this, along with the murder of Marcus Hamilton, would lead to the Senior Partners declaring war on Angel for his trespass against the organization. 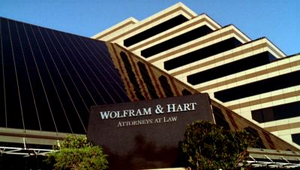 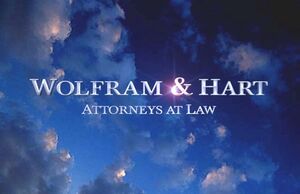 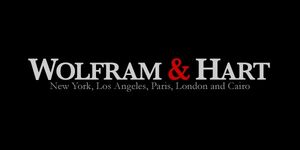 The official logo of Wolfram & Hart Attorneys at Law with offices in New York, Los Angeles, Paris, London and Cairo.