Member of the X-Men (formerly)

Devour Silver Surfer and Galactus to acquire their Power Cosmic.

James Howlett, also known as Wolverine, is a major antagonist in Marvel Zombies, which takes place in an alternate version of the horror comics Marvel Universe, called Earth-2149, where all super-powered beings became infected by an extraterrestrial virus which transformed them into Zombies.

He was created by Mark Millar and Greg Land.

At the Xavier Institute, he and the other X-Men members are fighting the zombified Alpha Flight. Wolverine was part of a team that had the right to return to the surface in order to halt the zombie threat, however, he ended up becoming infected with the zombie virus.

40 years later after he and the others ate Galactus, Wolverine gained a modified right arm. He and the others went back to Earth, specifically in Wakanda, where the Black Panther lived. He, Giant-Man, Iron Man, Dark Phoenix, and Firelord went to the Baxter Building, the home of the Fantastic Four. After they've destroyed the guard robots, Wolverine and the others go back to Wakanda and continue the malicious brawl.

After Iron Man tells him that the zombie virus is gone, he lets a victim he attempted to kill go and became good again. Malcom Cortez transported Wolverine and the other living zombified heroes to Earth-Z, telling Forge that the zombies are someone else's problem for now. Wolverine was killed when he faced his Earth-Z counterpart along zombie Spider-Man and Earth-Z's Kitty Pryde. 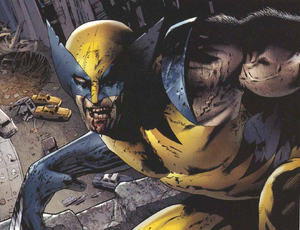