Eat Charlie and the Bears (failed).

The Wolves and their Alpha are the main antagonists of the We Bare Bears episode, "Brother Up". They are a gang of hostile wolves that will attack anything that they come across.

The wolf pack consists of wolves that all look identical, except for the Alpha, who has a cloth eye-patch on his right eye. The wolves are very hostile, aggressive, and predatory. They will not hesitate to kill anything that gets in their way and they love threatening other animals.

Two wolves are first encountered by the Bears when Charlie the Bigfoot tells them that he was getting chased by the wolves. The wolves were going to kill the bears and Charlie, but Panda unintentionally scares the wolves away, thus Charlie assigns Panda to be on the top of the bear stack.

Later on at night, Charlie warns the bears that the two wolves went back to their pack to report what happened and the alpha wolf wanted to challenge the bears outside. Panda has no choice but to face the wolf pack alone after Grizzly refuses to help, since he is upset that Panda is the bear on top, and Ice Bear and Charlie are too frightened to help Panda. Panda then goes outside where he goes face-to-face with the wolf pack and their alpha. Panda tries to scare them off by waving his backpack like he did last time, but Charlie pats him on the back too hard, causing Panda's backpack to fly out of his grasp. The wolves then rip Panda's backpack to shreds and proceed to kill him but Ice Bear stacks up with Panda to scare the wolves away. The alpha however is not phased and signals the rest of his pack to stack up higher then the two as a way to intimidate them. Panda then tells Charlie to get all the furniture from the house as a means of scaring the wolf pack. When the last wolf is stacked, Panda asks for one stack of furniture, but Charlie says they are all out. The alpha and the other wolf stack then advance on Panda and Ice Bear, intending on killing them. Panda then begs for Grizzly's help, and after hearing his brother's cry for help, Grizzly runs uptop the furniture stack and uptop Panda's back roaring at the wolf pack and scaring them back into the forest for good. 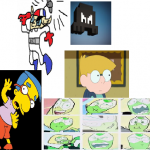