Servants of the Devil Who Feast on the Flocks of God

Depends in each folklore.

Wolves are predatory canines that are one of the most dangerous and most controversial animals in a human dominated world.

Wolves themselves are dog-like predators that hunt in packs and rarely attack humans (unless cornered by humans or believe humans are threatening them).

When humans were a hunter-gatherer species, the wolf was a respected and beloved animal. Regarded as a fellow hunter and was celebrated in stories and song. But as man became a farmer species, they viewed the wolf less and less as an ally or worse as an enemy, although there were exceptions.

During the reign of the Roman Republic and Roman Empire, farms were well protected and roads rarely went through wolf territory, trade was also quite good. As a result the Romans and the people they conquered lived in peace and security, while wolves did not go near their settlements, and the people did not go near wolves because the good farming and trading meant people could rely on the Roman Government for trade.

But after the Empire fell, and Europe became split into several partially organized kingdoms that could be attacked at any time, farming became more difficult and defenses were lower. Since trading was almost gone, people became forced to hunt again. This put humans into conflict with wolves, and quickly humans began to fear and despise wolves.

The church called them "Servants of The Devil who feast on lambs in the Flock of God". Although true that wolves at that period did attack human settlements, kill humans and kill their cattle, sheep and other domestic animals, this was really the fault of the humans because they constantly hunted deer to feed their families and left little for the wolves.

During his reign, King Edward I of England ordered all wolves in England to be killed to keep his people safe from wolf attacks. The order was not completed until long after his death but nevertheless bounties for wolves were high and today there is no wolf left in England. The same thing happened in many other parts of western Europe and today the only places were wolves can be found in Western Europe is in southern Italy.

During the time of the Renaissance, wolves were almost utterly gone from Western Europe, but the fear of them was still relatively high. Parents created fairytales for their children in which wolves were villains who liked to eat little children and other harmless creatures.

When Europeans colonized America, they were utterly horrified to discover wolves living there. Bounties were put on wolves and the ideas of wolves in Europe clashed with ideas of wolves from Native Americans (many tribes honored and respected wolves, but those ideas almost died out with the Native Americans). In 1914 the United States passed an order to exterminate all wolves in America and today the population of American wolves is barely a shell of what it used to be.

Since Christianity was the dominant faith and government in Medieval Europe, they portrayed wolves as Servants of Satan. Wolves were believed to attack devout worshippers of God and attack the very symbol of an innocent christian, the lamb. Lambs were easy prey for wolves and were viewed as the symbols of Christian people. It was through the fear of wolves that the fear of Werewolves emerged and werewolf trials were held against anyone suspected of being a werewolf similar to The Salem Witch Trials of America.

Wargs (often spelt as Worgs) are legendary monsters best described as a demon in the form of a large and particularly vicious wolf, although the term is heavily associated with Tolkien and his Lord Of The Rings franchise it has roots dating back as far as the Ancient Norse and was originally used to describe the great wolf-monster known as Fenrir.

For the first time, the Wargs are mentioned in the Hobbit in describing the events that took place after the dwarves led by Gandalf and Bilbo Baggins emerged from the caves of the Misty Mountains, fleeing from the goblins. Wargs were ferocious on their pack as well as their handlers. Coloration and patterning of the fur seems to vary throughout the breed, with stripes, mottling and other patterns appearing in shades of tan, ginger, liver, white and brown, with harder patterning appearing toward the back. Powerful haunches and a thumb on the front paws allowed the Warg to climb.

Parents fearing for the lives of their children often created stories in which wolves were evil creatures. The most famous one is the wolf in "Little Red Riding Hood" and unlike the happy version of the story in which most people know of, in the original version, no one comes to the girl's rescue and the wolf eats her. Another notable fairytale wolf is the wolf in "The Boy Who Cried Wolf" who ate the main character when no one would rescue him. Other fairytale wolves include the Big Bad Wolf from "The Three Little Pigs", the wolf from "Peter and the Wolf", and Maugrim from "The Chronicles of Narnia, the Lion the Witch and the Wardrobe".

A pack of wolves appeared as minor antagonists in Jack London's White Fang, as well as its 1982 anime adaptation and 1991 Disney adaptation, where they stalk a pair of mushers named Henry and Bill. Kiche, White Fang's mother, lures the dogs out one by one before the wolves maul Bill to death. In the anime adaptation, Bill's partner is Weedon Scott, the wealthy gold hunter who saved White Fang's life from Beauty Smith. In the Disney adaptation, after Alex reluctantly lets Jack join him and his friend Skunker to find his father's claim, Jack realizes that they are being stalked by a pack of wolves, but Alex scares them away with a gunshot. The next night, Kiche and the wolves follow them and Kiche decides to attract the attention of one of the dogs named Digger, but Digger chases her up the hill. One of the wolves snarls at Digger and Kiche chases him, but Skunker wounds her. He goes into the forest to rescue Digger, but is mauled to death by the wolves offscreen. The next morning, the wolves try to avenge Kiche by attacking Jack and trying to burn Alex until another group of mushers scare them away.

A pack of wolves appeared as minor antagonists in the 1991 Disney animated adaptation of Beauty and the Beast and its 2017 live action adaptation of the same name, where they are seen stalking an inventor named Maurice, who escaped to the Beast's castle for safety. They are later seen chasing down Maurice's daughter Belle, though the Beast arrives to the rescue by fighting them and sending them to flee away. The wolves also made a cameo appearance in Beauty and the Beast: The Enchanted Christmas, where they spot Belle searching for a tree, but decided to leave her alone due to their past experience with the Beast.

A pack of wolves appeared as minor antagonists in the 2013 Disney animated film Frozen, where they are seen pursuing Anna, Kristoff and Sven through the cold forests of Arendelle to find Queen Elsa. Fortunately, Kristoff manage to have Sven jump over a high gorge to evade the wolves, much to their anger. The wolves later made a cameo appearance in Olaf's Frozen Adventure, where they chased the snowman Olaf, who managed to evade them for good.

Today, wolves are a very controversial animal species (If not the most controversial animal in the world). It is known today that wolves are a valuable part of Nature's balance so there have been many attempts to reintroduce the wolf into areas it once roamed and hunted. Some famous attempts include the reintroduction of wolves in Yellowstone National Park, the reintroduction of wolves in Minnesota and other places. But even today some people fear and despise them. Mainly people who live on farms and ranches hate wolves and today there has been a major conflict between ideas of wolves in America. Some people in the UK have been trying to get wolves reintroduced there, although if it does succeed, it probably will not happen for a long time because wolves need much space and many people who live in the UK's Countryside are unwilling to give up their homes, farms and ranches for wolves, especially in Scotland because much of the countries economy relies on sheep herding.

A Warg as seen in The Two Towers.

A Warg as seen in The Hobbit. 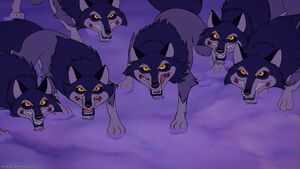 The wolves depicted in Beauty and the Beast. 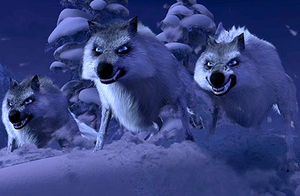 The wolves depicted in Frozen. 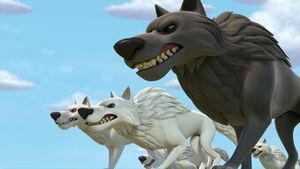 The wolves depicted in Rescue Riders.
Add a photo to this gallery 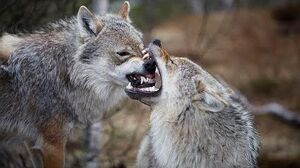 When Wolves Attack
Add a photo to this gallery

Retrieved from "https://villains.fandom.com/wiki/Wolves_(folklore)?oldid=4207886"
Community content is available under CC-BY-SA unless otherwise noted.