Note: This article is about an alternate version of Wonder Woman seen in Justice League: The Flashpoint Paradox, not the mainstream Wonder Woman, who is nothing like her Flashpoint counterpart.

Win Aquaman's love or kill him.
Conquer the Earth.

Wonder Woman in the Flashpoint universe, is the oppressive queen of the Amazons who is shown to be a very cruel and tyrannical, whose war with Aquaman and Atlantis is one of the chief reasons why the Flashpoint world is an apocalyptic ruin. She also serves as one of the two secondary antagonists (along with Aquaman) of the 2013 DC animated original film, Justice League: The Flashpoint Paradox.

In the film she was voiced by Vanessa Marshall, who also voiced Madame Viper in The Avengers: Earth's Mightiest Heroes.

In the alternate "Flashpoint" universe, Diana became queen of the Amazons instead of becoming a superhero and joining the Justice League. Wonder Woman and her Amazons once aided Aquaman and his Atlanteans against some unknown enemy. Afterwards Aquaman and Wonder Woman became taken with one another and had an intimate encounter, much to the horror and dismay of Aquaman's wife Mera, who unbeknownst to Aquaman and Wonder Woman witnessed the sexual encounter. Confronting Wonder Woman later, Mera was swiftly decapitated by the Amazon Princess, who then sent Aquaman Mera's severed head (or headless body, in the comics) as a "gift". Enraged, Aquaman declared war on the Amazons, a conflict that would come to devastate the entire planet, first when Aquaman flooded most of Europe, and then when Wonder Woman and her Amazons seized control of what remained of the continent, killing over 30,000,000 people in the process.

Attempting to stop the madness, the US army sent in one of their agents, Lois Lane to try and make contact with the resistance movement in Europe led by Grifter. Wonder Woman and some of her Amazons later captured one of Lois Lane's allies, Steve Trevor, who Wonder Woman personally murdered with homicidal glee by strangling him to death (a dark irony given Steve Trevor's status as Wonder Woman's boyfriend in mainstream continuity).

During the final battle of the Flashpoint world, Wonder Woman personally engaged Aquaman, who condemned her for not only slaying his wife but wearing her helmet as a trophy, to which Wonder Woman countered that the helmet was a warning. Wonder Woman also battled Captain Thunder, but forced him to turn back into the mortal children who made up his being. Wonder Woman then murdered a helpless Billy Batson in cold blood. Wonder Woman then cornered Aquaman and ordered his surrender planning to massacre the male population of Atlantis and enslave the females. Wonder Woman then boasted she would execute her opponent for the "good of all" at the moment Aquaman activated his doomsday weapon and Diana remorsefully held the body of the dead Atlantean king as the shock wave from the device approached. She was finally killed when the doomsday weapon of Atlantis was activated and his crime against humanity is erased, after the restoration of the timeline by Flash.

In contrast to regular Wonder Woman, who is consistently shown to be kind, patient, benevolent and loving, the Wonder Woman of the Flashpoint World was a cruel, sadistic, bloodthirsty, tyrannical, and merciless despot who was responsible for the deaths of millions of people. Notably even before the war with Atlantis this version of Diana was shown to lack the lofty morals of her counterpart, first sleeping with a married man and then murdering his wife, which prompted the war between Atlantis and Themyscria in the first place.

Despite claiming that men were the cause of all the world's evils, Wonder Woman herself committed and oversaw terrible atrocities, up to and including planning to kill everyone who was not an Amazon, effectively rendering her claim entirely hypocritical and deceptive. She also hates humanity in flashpoint and has no problems for killing children.

Notably Wonder Woman here seemed to feel as if she deserved Aquaman as a mate and wanted him entirely for herself, hence why she killed Mera and reacted negatively to Aquaman's ensuing wrath. Most telling is Wonder Woman's angry accusation to Aquaman during the final battle that he never loved her, though the same could easily be said of Wonder Woman herself, her attraction being based more out of lust and possessiveness than genuine love.

In terms of power and abilities, Flashpoint Wonder Woman was shown to have much the same capabilities as her mainstream counterpart, though also clearly favored the sword, in keeping with her more brutal and bloodthirsty personality. Her ruthless nature also allowed her to use her powers in a more dangerous fashion. 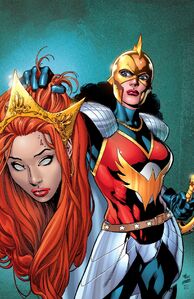 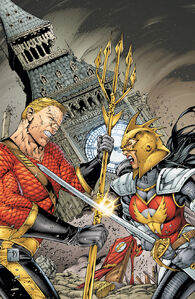 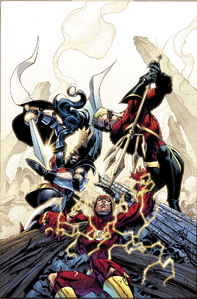 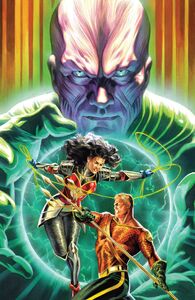 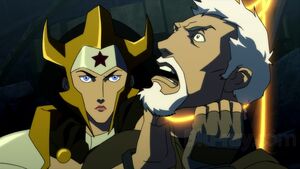 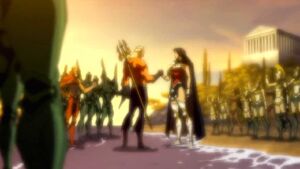 Aquaman and Wonder Woman makes a truce, one that will not last. 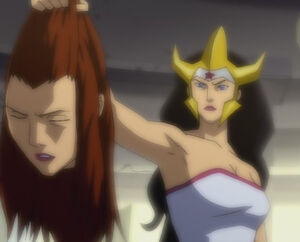 Diana killing Mera after she was confronting for her affair with her husband, Aquaman. 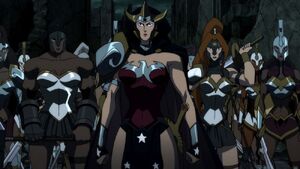 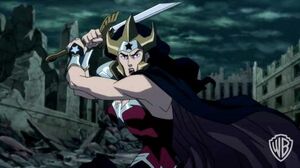 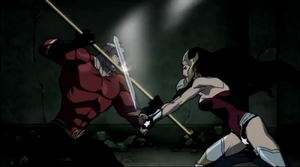 Locked in battle against Aquaman in what will be their final battle. 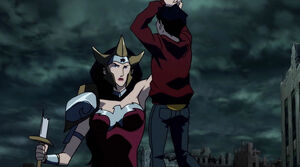 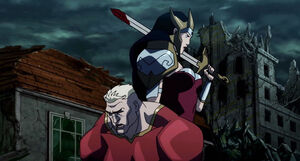 Aquaman's last defeat at the hands of Wonder Woman, moments before the Apocalypse.