Wood Man is one of the Robot Masters made by Dr. Wily and fought by Mega Man and a minor antagonist in Mega Man 2.

Wood Man is made almost completely out of wood for extra protection. He has great strength and resistance against physical blows because of this. Due to his wooden body, however, Wood Man is vulnerable to fire and cutting weaponry. Many games have depicted him as superannuate against Mega Man. While he is kind he can be cruel to those who harm or fail to appreciate nature, Wood Man enjoys the world's natural beauty, and this often drives him to go hiking and mountaineering in his spare time.

Wood Man is one of the eight robots created by Dr. Wily to destroy Mega Man. He has a forest as his stage. After getting through a forest, Mega Man confronts Wood Man and defeats him.

In battle, Wood Man activates his Leaf Shield and throws four leaves to the ceiling. He then throws the shield straight and the four leaves float down zigzagging, making them difficult to dodge the shield. The Leaf Shield will deflect everything Mega Man shoots at Wood Man; however, it can be avoided by jumping over it and then moving to a position where the falling leaves don't hit Mega Man. After that Wood Man is momentarily vulnerable and can be attacked.

Mega Man II is not to be confused with Mega Man 2.

Wood Man is one of the first four bosses from the Mega Man II (the Game Boy retelling of Mega Man 2). He acts in a similar way to his appearance in the Mega Man 2. His weakness is the Metal Blade (also usable against him in Mega Man 2).

Wood Man makes his cameo appearance and his Leaf Shield ability is utilized as data of the first Doc Robot in Shadow Man's HQ. While the Doc Robot with his data is weak to Needle Cannon and Search Snake, it is more recommended to defeat him with the Needle Cannon, as it is easier to hit the Doc Robot with it and it can deal more damage with consecutive hits for lower weapon cost. Any of these weapons defeats the Wood Man-Doc Robot in seven hits. Unlike the original Wood Man, Doc Robot using Wood Man's ability is very tough to defeat.

Wood Man appears as a mini-boss in the Mega Man 8 (Sega Saturn edition), as a one-time boss in Search Man's base. He grants Mega Man an item called Bolt (relocated in the PlayStation edition) when defeated, making it the only mandatory Bolt to be forcibly acquired in the game. He now jumps more than one time after throwing Leaf Shield. He is weak to the Astro Crush and Flame Sword, the latter one being more recommended due to its lower energy cost and dealing the same damage. Any of these weapons will pierce through his shield and defeats him in ten hits.

Wood Man and his combat skill once again have cameo appearance as part of data of the Weapons Archive and he is weak to Triple Blade. Strangely, Wood Man takes normal damage from the Solar Blaze.

Wood Man appears as one of the six bosses from the classic Mega Man 1-2 course. Like Mega Man 2, he fights by using his Leaf Shield and jumping, but now he is also able to attack by taking the shape of a log and rolling. In this game he is weak to the Super Arm.

Wood Man appears as the first boss of Episode 2 in the game. Here, it is revealed that after Mega Man obliterated Shadow Man at the end of the Episode 1 (fifth opponent), Wood Man had attempted to repair him, but Shadow Man was beyond saving. As a result, Wood Man is seen to be (uncharacteristically) incredibly angry and vengeful towards Mega Man, vowing to kill him for destroying his friend. At first Mega Man is reluctant to fight, but he remembers what his brother Proto Man and his rival Quick Man told him and fights, defeating Wood Man. Wood Man and Wily's other robots (except for Shadow Man) are later revived by Doctor Wily and Ra Moon near the end of Episode 3, but they are betrayed by Ra Moon and incapacitated. When Mega Man is defeated by the New Yellow Devil, he can ask the robots to give him their remaining energy. Wood Man and Hard Man protect Mega Man while everyone gives their energy, shutting down afterwards. Wood Man and his brothers are apparently destroyed alongside Ra Moon and its temple.

In addition to both his theme and special returning, Wood Man appears as a spirit in Super Smash Bros. Ultimate. A Advanced level Shield type spirit, Wood Man gives the user a weakness to fire attacks when used. In his spirit battle, the player must fight two Mega Mans in a stamina match on a hazardless Duck Hunt stage, with the two Mega Mans preferring to use their down special and shielding often. 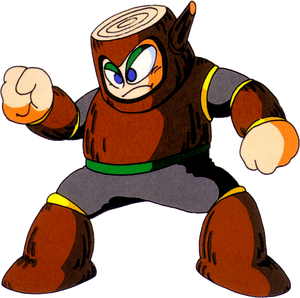 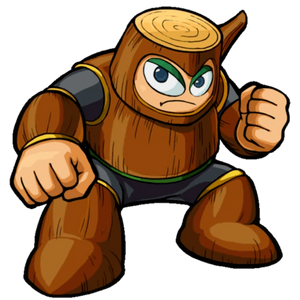