The Woodland Critters (mistakenly referred to as Christmas Critters) are a group of deceptively cute, warm and welcoming, yet unimaginably evil creatures from the adult comedy-series South Park. Although they were originally nothing more than figments of Eric Cartman's imagination, they would later return as actual threats due to the existence of Imaginationland.

They were the main antagonist of the Season 8 episode Woodland Critter Christmas, the secondary antagonists of the Imaginationland trilogy and supporting antagonists in the video game, South Park: The Fractured But Whole.

They are widely considered to be amongst the most dangerous and disturbing antagonists in the entire show (also showing just how twisted Cartman himself is for creating them).

The episode takes place mostly inside of Eric Cartman's imagination.

The episode is actually just a story Cartman wrote for school on Christmas.

The story begins with Stan (referred to as "The boy in the red poof ball hat") in the woods (for some reason) where he meets the Woodland Critters.

Stan is very confused about the critters, but they eventually convince him to help them with their Christmas tree by putting the star on top of it.

Stan does so (reluctantly) and leaves for his house.

Stan awakens to find the Woodland Critters in his bedroom (somehow getting inside undetected) that night.

They happily tell him that Porcupiney is pregnant with the critter's "savior" (Stan believing them to mean a child of God).

They once again persuade him to help build a shelter for their baby (again Stan reluctantly and annoyingly agrees).

Stan makes his way to the mountain where the lion lives and draws her out.

Stan eventually tricks it into falling to her death, killing the only thing that could stop the Woodland Critters.

The lion's three (now orphaned) cubs are drawn out by the commotion and are horrified by the death of their mother.

The cubs can talk and are humanly intelligent and ask Stan in tears why he murdered their mother.

Stan, realizing his mistake, confronts the Critters and discovers their true motives. Their 'savior' is actually the son of Satan (to which the Critters seem surprised that he would not know as, in their words, "only Satan would fuck a porcupine").

Still wanting to atone for killing the mountain lion and allowing the Woodland Critters to give birth to the anti-christ, Stan returns to the mountain lion's lair to try and get the cubs to help him stop the critters.

After the cubs are trained by a doctor, Stan and the cubs rush to stop the Woodland Critters.

Meanwhile the Anti-Christ needs a non-baptized human host to possess when born so the critters search for one. Afte realizing that he has never been baptized, they kidnap Kyle (who is more evil due to this being Cartman's story) and use him as the host.

Stan and the cubs are too late and find that the Anti-Christ has already been born. Santa Clause then arrives (being drawn to the scene by the satanic red light in the sky) and demands to know what's going on.

Stan explains the whole story and Santa berates Stan for his idiocy before killing all the Woodland Critters with a SPAS-12 shotgun.

Kyle suddenly wants to be the Anti-Christ's host and allows it into his soul, wanting to make the world a "better place for the Jews". However, he finds having the Anti-Christ inside him to be painful and he changes his mind about his decision.

Though Santa believes there's no way to save the world other than to kill Kyle to stop the Anti-Christ, Stan has the lion cubs abort the Anti-Christ from Kyle's body (literally) and Santa kills it.

Santa then revives the cub's mother and the story ends happily...except for Kyle who dies of AIDS two weeks later.

The Woodland Critters appear as a boss in the video game. After The New Kid time travels to the future, where Eric Cartman’s hand puppet Mitch Conner became mayor and made every day Christmas, the gang is confronted by the critters, who were told to murder them. Luckily, The New Kid prays to Christ and summons Santa to once again kill the critters.

The members of the woodland critters are: 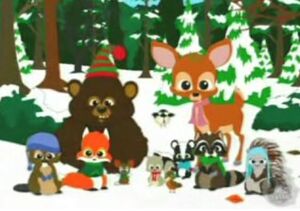 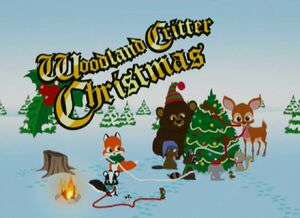 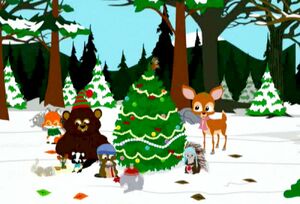 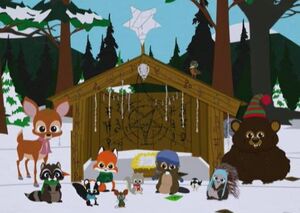 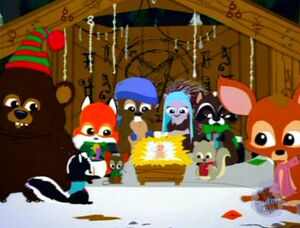 The Woodland Critters succeeded in bringing about the birth of the Anti-Christ. 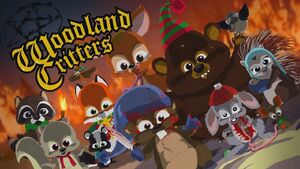 Woodland Critters title card from South Park: The Fractured But Whole
Add a photo to this gallery

Retrieved from "https://villains.fandom.com/wiki/Woodland_Critters?oldid=4041650"
Community content is available under CC-BY-SA unless otherwise noted.