Woodmon are minor villains in the Digimon series.

Woodmon are small Champion Level Digimon that's made of wood, They have four arms, two that are small with fingers, and two huge arms. Woodmon also have four legs as well.

Several Woodmon lived in the forests of the Digital World and sucked the energy from anyone passing by. One of this was Ogremon, who however fought against and destroyed several of them but was quickly outnumbered by the Vegetation Digimon. Suddenly the meteor containing MetalEtemon crashed down on the remaining Woodmon, sending Ogremon off the cliff he was standing on. Later on several other Woodmon seemed to work for the Dark Masters since they fought against Leomon.

A Woodmon was under the control of the Digimon Emperor's Dark Rings but was freed by Flamedramon.

The three Mushroomon Brothers became a giant Woodmon which defeated Kazemon before being defeated, purified, and reverted back to 3 Mushroomon by Lobomon. 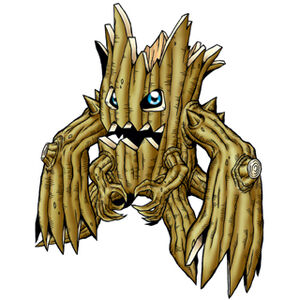 Retrieved from "https://villains.fandom.com/wiki/Woodmon?oldid=3531322"
Community content is available under CC-BY-SA unless otherwise noted.