Woody Johnson is one of the main characters and the overall main antagonist/anti-hero of the Comedy Central TV series Brickleberry. He is Steve's dimwitted, psychopathic and sadistic boss.

Woody appears to be a blond-haired, middle-aged man who is the owner of the Brickleberry Park. He is very sadistic and tends to scold at Steve for no reason, he is very greedy and ruins the park constantly for money.

Long before his military career, Woody was a porn star known as "Rex Erection". After having a successful career, and picking up drugs, Woody's asset was now useless. Woody was then relegated to non-sexual roles. After a bit of depression, Woody joined the army. Its not known what Woody did in the military, but it can be gathered that he conducted actions that can be considered war crimes. Currently Woody is a recovering post-traumatic ranger, with a military background. He worked his way up to head ranger over his thirty-year career at Brickleberry. Woody also took Malloy under his wing after the bear's family "disappeared." He always has the park’s best financial interest in mind and has little care to even hatred towards the physical essence of the park. These includes setting up electrical trees to avoid angry complaints by phone calls and starting a fire that will burn down the park then putting it out to get good reputation in "Race Off!".

Woody is shown spoiling Malloy rotten and doing anything he can to please his selfish demands at the beginning of "Welcome to Brickleberry", the pilot episode. However, after this episode Woody and Malloy have become bitter rivals especially since Malloy threatens to kill, take advantage of, and/or bankrupt Woody in most episodes. It was also shown in a flashback 3 years ago in "Woody's Girl" that when Malloy was a baby, he very loved Woody and expressed his love for him through his first words and letter blocks. Malloy's testosterone have caused him to become tired of Woody's attitude as well as develop flippish behavior between those 3 years as according to "Saved By The Balls", Malloy can suddenly and instantly become more and more aggressive.

Both Woody's mother is dead (as revealed in "Two Weeks Notice", but debunked in "That Brother's My Father") and his wife is dead (as revealed in "Squabbits"). Woody claims that his mom's death (without any explanation why his mom died at an early age) upset his perverted dad so much that he forced Woody into wearing panties and a bra, as well as perhaps to look even more feminine. Woody complains that forgiving his dad is illogical and his memories of being abused still haunt him in the show's present time. Woody's mom and Woody's ex-wife appeared in a flashback in "My Way or the Highway" during Woody's 8th birthday and she encouraged him to have sex with a female hooker (his wife) so that he doesn't become gay in the future.

It is revealed in "Obamascare" that he is severely allergic to crab cakes. In That Brother's My Father" his mother shows up alive and well and marries Denzel.

Woody's gentle tone can sometimes be misunderstood for weakness, and behind the intimidating 'stache is a man who truly does care for his friends and co-workers. Unfortunately, money can sway his morals left and right faster than a grandfather clock.

Despite often pursuing a girlfriend, Woody is shown to be a misogynist in "My Way or the Highway." 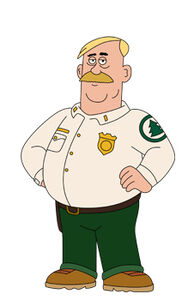 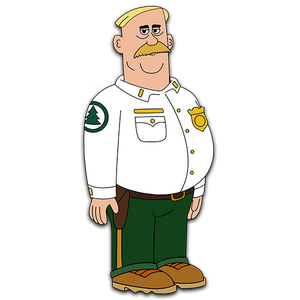 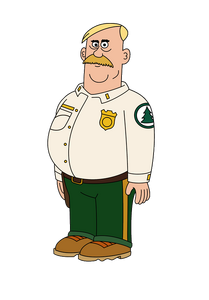 Retrieved from "https://villains.fandom.com/wiki/Woody_Johnson?oldid=3623225"
Community content is available under CC-BY-SA unless otherwise noted.