Member of the Jokerz gang

Aid the Jokerz in taking over Gotham City (failed).

Aid the Joker in his plans (failed).
Kill Batman (failed).

Woof is one of the antagonists in Batman Beyond Return of the Joker. He is a member of the Jokerz gang.

Woof started out as a useless grunt and was only able to get in with the help of his friend Ghoul. Desperate to be included in the supervillains, Woof broke into a lab and used a gene splicer to fuse is a body with a spotted hyena.

He returned to the team as a mutant hybrid of monstrous appearance and ability. Not only did the Hyena DNA increase his strength and stamina, it negatively affected his mind, causing him to devolve into a psychotic and bestial foe.

Woof, along with his counterparts; Bonk, Ghoul, Chucko, and the Dee Dee Twins were hired by the Joker to assist him in his plan to take over Gotham. They attempted to steal a cutting edge system scanner for him, but the new Batman showed up. They put up a fight, and Woof, like the Deeds, was able to get the better of Batman for a short time before he gained the upper hand again. Batman then knocked out Ghoul and Woof, before chasing after the rest of the Jokerz.

Woof reappeared at the heist at Wayne Enterprises, in the second attempt to steal a system scanner. He came out from behind a bush and ran to the stage where Bruce Wayne was giving a speech. Woof leaped onto the stage and began mocking the old man. When he attempted to attack, Bruce locked Woof out with his walking stick. When the Joker and the Deeds showed up on stage, the Joker set Woof on Batman. Woof tackled him, and almost killed him when the Joker called him to escape with him and the Deeds.

Woof confronts Batman near the end at Jolly Jack Candy Factory, but Batman set Bruce Wayne's pet dog Ace on him. Ace attacks Woof and begins mauling him. Caught completely off his guard, Woof panics and runs for it.

Woof still worked with the other Jokerz under Chronos in Justice League Unlimited. However, in this timeline, he had been physically altered to have robotic arms. Even with these new features, he and the rest of the gang were still defeated. 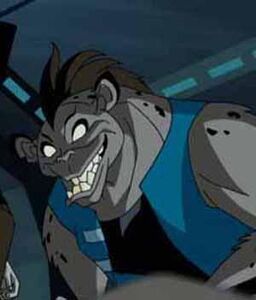 Woof
Add a photo to this gallery

Retrieved from "https://villains.fandom.com/wiki/Woof?oldid=3707847"
Community content is available under CC-BY-SA unless otherwise noted.