Bubsy in Claws Encounters of the Furred Kind

Steal all yarns in the universe.

Kill Bubsy for interfering their goal.

The Woolies are the main antagonists from the Bubsy series, acting as enemies in Bubsy in Claws Encounters of the Furred Kind, Bubsy 3D and Bubsy: The Woolies Strikes Back. They are an alien race hailing from the planet Rayon, ruled by the ever-greedy Twin Empress Poly and Esther.

In the first game, the Woolies have invaded Earth to steal all of Earth's yarnballs (it is not specified what use they have for it). Since Bubsy owns the biggest collection of yarnballs in the world, he decides to fight them to protect his collection. He defeats the Wollies and fights Poly and Esther, who retreats after being defeated.

In Bubsy 3D, Poly and Esther enact a plan to take revenge on Bubsy, sending a UFO to Earth which kidnaps Bubsy and brings him to their home planet. However, Bubsy escapes and starts looking for parts to create a rocket ship to return home. Poly and Esther then gives a long speech to her subjects, rallying them to go after Bubsy and stop him. Bubsy collects the parts and defeats Poly and Esther, escaping the planet on his rocket. However, he puts too much power on it, ending stranded in prehistoric times and thus allowing the Woolies to continue with their plans. This ending was later retconned.

In Woolies Strikes Back, the Woolies once again invade Earth and steal the Golden Fleece, Bubsy's personal treasure, taking it to an asteroid hovering above the planet where they have set up a base. Bubsy goes after them and once again takes on Poly and Esther, returning to Earth with the Golden Fleece while the asteroid blows up. 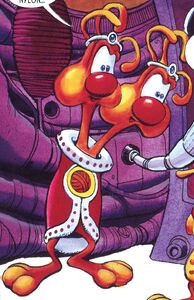 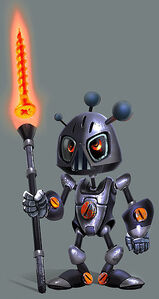 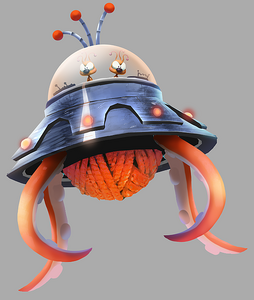 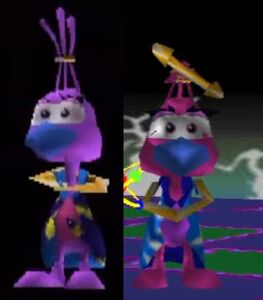 Poly and Ester from Bubsy 3D
Add a photo to this gallery
Retrieved from "https://villains.fandom.com/wiki/Woolies?oldid=3234338"
Community content is available under CC-BY-SA unless otherwise noted.