To continue his murderous cycle forever.

The World Gobbler is the main antagonist of the 2008 French-German-Luxembourgish computer-animated film Dragon Hunters, which is based on the series of the same name. It is a gargantuan-sized skeletal dragon that  once destroyed Lian-Chu's village when he was just a kid, as shown in the beginning of the movie.

Its vocal sound effects were provided by Jean-Marc Lentretien.

Lord Arnold wants to find knights to destroy the World Gobbler, a powerful dragon which awakens every 20 years causing great destruction in this futuristic and medieval world of floating land masses, ever terrorized by a widely varying menace of monsters known collectively as dragons. His grandniece, Zoe, is a child passionate with the fairytale knights, especially the Silver Knight Gothic, and upon hearing her uncle's distress, flees the castle in search of a knight. Eventually, Zoe is attacked by a pair of Jimbob dragons, and Lian-Chu, a roving dragon hunter, rescues her, leading Zoe to think that Lian-Chu is a knight. Gwizdo, Lian-Chu's only childhood friend, convinces Lian-Chu to pretend to be a knight when they hear that Zoe's uncle is rich, thus enabling them to fulfill their dream of someday owning a farm. They decide to go to the castle, whereupon the blind Lord approves Lian-Chu's bid as a knight, and briefs him on the World Gobbler (This "World Gobbler" is taken directly from the Norse mythological being Jormungandr, the World Serpent). Their mission is to stop the World Gobbler from destroying their world.

Lord Arnold, Lian-Chu, Gwizdo, their little pet rabbit-dog Hector, and (ever escaping and big-mouthed) Zoe, set off to the end of the world, where the dragon's ancient lair is - among the ruins of already dead cities. They find that the "World Gobbler" is a dracolich, an undead dragon and a skeletal dragon from Zoe's nightmares. Lian-Chu battles with the dragon and hides when he knows he is no match. The dragon, in turn, tries to eat Gwizdo, Zoe, and Hector. Just when the dragon is about to eat his friends and they desperately call him, Lian-Chu has a flashback of him making a childhood promise to slay the dragon. Lian-Chu regains his courage and throws his two knitting needles into the only vulnerable part of the dragon, the eyes. The World Gobbler agonizes and dies, as the metal needles united energy pools, filled his eyes, and with a blinding flash the world of the ruins and the growing darkness is transformed into a world of the green fields and the floating bunnies. The Lord is also cured, but he forgot about his promise to reward young hunters. Zoe leaves her horrible uncle to live with her heroes. She takes some of her uncle's money and gives it to Gwizdo and Lian-Chu for their future journeys and plans about their own home. 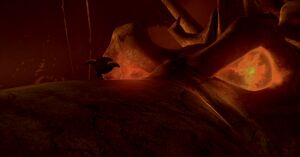 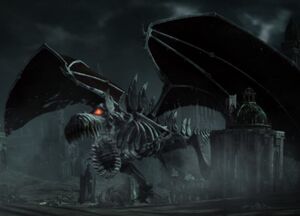 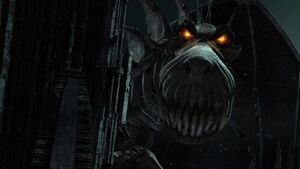 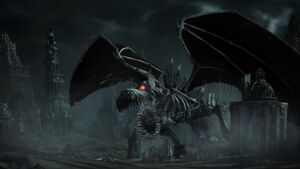 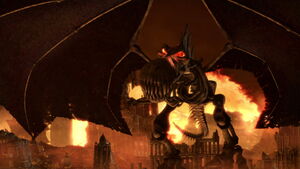 Retrieved from "https://villains.fandom.com/wiki/World_Gobbler?oldid=3584286"
Community content is available under CC-BY-SA unless otherwise noted.