Worldender is a minor antagonist in the Rick and Morty episode "Vindicators 3: The Return of Worldender". He is the arch-nemesis of the Vindicators (a superhero team). His villainous nature coincides with his name as one of his main goals is to destroy countless planets and species, the other one being able to successfully eliminate the Vindicators.

At some point in his life, Worldender became evil and decided to wreak havoc throughout the universe. He acquired an army of followers dedicated to his cause and eventually clashed with the Vindicators, becoming their arch-nemesis from that point afterwards. Worldender has been defeated by the Vindicators before, how many times though is unknown, but this time comes out of hiding from his lair and plans to continue his old malevolent schemes.

Vindicators 3: The Return of Worldender

Rick Sanchez and Morty Smith attend a meeting with the Vindicators to discuss about Worldender's return. The meeting doesn't end well, however, with Rick mocking them due to not wanting to be there and Morty finding out that the Vindicators excluded him and Rick on a last adventure.

Morty and Rick then go to a bedroom with Rick sarcastically telling Morty if he is happy being here and notes that the Vindicators were lamer than the last time they were with them. Morty corrects Rick though and says that they weren't there last time since the Vindicators left without them. Morty also mentions that the Vindicators lost some members while Rick and Morty were gone, those members being Lady Katana, Calypso, and Diablo verde. The conversation between them then escalates when Rick doesn't acknowledge the Vindicators as heroes but Morty however believes differently. Rick then scoffs and notes that Morty doesn't have good taste. Rick then says he's going to get a drink and leaves the room back to his home on Earth via portal gun.

After several hours go by, the Vindicators reach the planet where Worldender has established a headquarters there. Morty and the Vindicators (along with Rick but is blackout drunk and carried by Crocubot) are able to get past Worldender's security drones guarding the building. They manage to infiltrate his lair but can't go any further after being cut off by gun turrets. The Vindicators are forced to wake up Rick with Supernova telling him they need his help to proceed.

Rick then makes a serum that forms a creature and pops it to heal his bloodshot eyes. He is yelled at by Supernova for messing around but Rick counters by saying that "I can't help if I can't see". Rick then tosses a CD-like gadget from his pocket which absorb the bullets and creates four tiny one-eyed robots. These said robots split into two pairs and then attach to each of the gun turrets and cover the muzzles. Rick then jumps out in a ta-da body pose where the gun turrets fire but the bullets are being contained within the robots. Eventually the turrets malfunction which then explode and Rick and the rest of the group are able to proceed.

Alan Rails then mentions that he could have simply used his ghost train powers instead when Rick immediately mocks him. They then enter a room where several of Worldender's henchmen are lying dead. Crocubot asks why would Worldender slaughter his own men and several women with Maximus Renegade Starsoldier suggesting that because of Worldender's reputation it is the reason why he did it. Rick then mockingly walks past them for trying to be vigilant. Rick then accidentally steps on a floor panel which then drags out Worldender who is hanging by a hook with his entrails cut open and leaking out. Worldender grunts in pain before eventually succumbing to his wounds and dies.

Worldender appears as a giant like figure towering several feet above his allies and enemies alike. Worldender has one bloodshot yellow eye with a black pupil on the center of his face. He has pink like skin on his face and on parts of his chest, fingers, and neck. The other type of pigmentation Worldender has is crimson blood like skin that covers the rest of his head, chest, fingers, and neck. He wears solid black armor that covers about half of his torso, his entire shoulders and legs, and most of his arms. Worldender has grayish spikes protruding out of his armor covering his shoulders.

Considering his bloodlust and merciless nature, Worldender is a sadistic, genocidal, ruthless, and uncaring individual with no regards to anyone but himself. Worldender is more than willing to slaughter entire alien races and destroy countless planets simply for his enjoyment, demonstrating his viciousness and insanity. Despite this, it seems that he does at least value his subordinates either because they are of a similar species and/or they simply help him accomplish his goals of destruction amongst the cosmos. 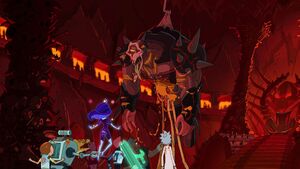 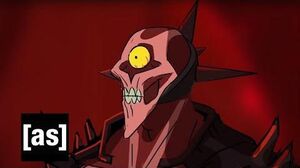 Who Are 'The Vindicators'? Rick and Morty Adult Swim-2