Creation of the Trive of Ancients

Kill Mario and his friends for waking him up (failed).

Wracktail is a boss encountered in the Flipside Pit of 100 Trials in Super Paper Mario. He is an evil prototype of Fracktail.

Wracktail's past is unknown, but the only things known about him are that he was created by the Tribe of Ancients and always claimed himself to be a god, until he was locked away by the Tribe of Ancients mentioned by Wracktail as the Ancients. He looks almost exactly like Fracktail, his less wrathful and weaker version, with the exception of his color being white instead of red. Once Mario comes into the 100th room of the Flipside Pit of 100 Trials, Wracktail will appear revealing that the Ancients locked him in the pit, and he will punish Mario and his friends with death for waking him from his "sweet peace of slumber". Once he is defeated, he will warn Mario, Luigi, Peach and Bowser that he's not the only monster created by The Ancients and then tells about the next threats in the more dangerous Flopside Pit of 100 Trials before exploding and dying in the process. Upon his defeat, a chest will appear revealing a new Pixl called Dashell and a pipe will appear as well to the next trial.

Wracktail has the same abilities as Fracktail, but he is stronger and more wrathful than him; however, he can be defeated in the same way used to defeat Fracktail. Mario must jump on Wracktail's back and grab the Wrackles on his back and throw them at Wracktail's antenna, while Luigi's Super Jump can also be useful to attack the antenna and Princess Peach's parasol move as well. 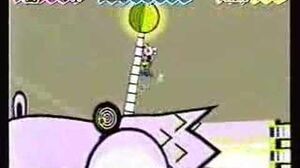