Spirit: Stallion of the Cimarron

Capture Spirit and bring it before The Colonel (succeeded).

Pompous Hunters
The Wranglers (named Roy, Bill, Jake, Pete and Joe) are the five secondary antagonists of the DreamWorks' 6th full-length animated feature film Spirit: Stallion of the Cimarron. They're a traitorous gang of cowboys who work for the Colonel.

One night, Spirit notices a campfire nearby and investigates. There he found horses kept as slaves and the wranglers resting. As Spirit began sniffing into Bill's boot, he unwittingly woke up Bill, who woke up Jake to alert him of Spirit's presence afterwards. As the two get up and make ready to subdue him, Spirit began sniffing Joe who kissed Spirit in his sleep, much to Jake and Bill's disgust. Then, all of a sudden, Joe woke up in shock after he discovered he kissed a horse. This woke up Pete and Roy and all of the wranglers went after Spirit.

As they chased after Spirit on their horses, Spirit managed to get away from them by hiding in a ditch. He appeared out of hiding after the wranglers ride past him and ran up to Joe's horse and bit Joe in the rear, knocking him off his horse. Suddenly, Spirit went to his herd and alerted them that they were safe. Just then, however, the other four wranglers caught up to him. Spirit ran through them with Bill and Jake tailing him. As they were fixing to corner Spirit by a chasm wall, Spirit ran up the chasm and soar past the two with ease. As Spirit got away, however, Pete threw a lasso around his neck, capturing Spirit, as well as the other wranglers tossing their lassos onto him, pinning him on the ground. Then they dragged Spirit away from his herd and into the desert where they approached a U.S. cavalry fort. Roy was seen talking to a soldier while the other four wranglers watched Spirit being dragged into their fort. The wranglers were not seen or mentioned after that. 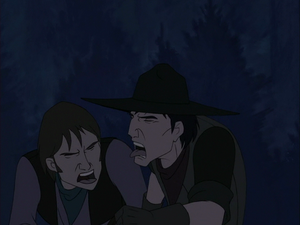 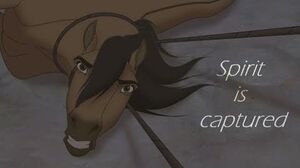 Spirit Stallion Of The Cimarron - Spirit is captured (HD) 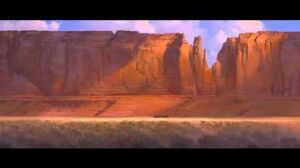