Wrestling Star is a villain in the Teen Titans series and a tough wrestler.

He is a professional wrestler and a student at the H.I.V.E. Academy. The academy was destroyed by the Teen Titans. Some time later, he joined the Brotherhood of Evil and fought the Titans. His mask was removed and he was frozen in the final battle.

Wrestling Star has super strength and is knowledgeable about wrestling. He also has super durability and resistance. 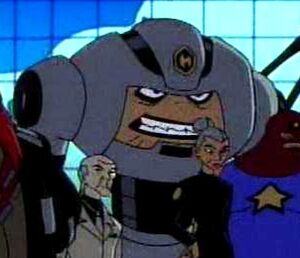 Retrieved from "https://villains.fandom.com/wiki/Wrestling_Star?oldid=3657786"
Community content is available under CC-BY-SA unless otherwise noted.