Leader of the Heylin

Wuya is one of the main antagonists in Xiaolin Showdown, the main antagonist in the first series and principal antagonist to the whole Xiaolin series. Wuya is an evil Heylin witch who was once the most powerful and evil being in the world and who also once tried to conquer the world One-thousand and five-hundred years prior to the show's beginning. She is constantly trying to collect the Shen Gong Wu (magical artifacts that, when put together, form a powerful demon that called Mala Mala Jong) in order to take over the world. Since she is a ghost for a great part of the series, and she needs a living person to collect these artifacts for her.

One-thousand and five-hundred years before the story begins, Wuya attempted to conquer the world. She was defeated by Grand Master Dashi, who trapped her in a magical wooden puzzle box. In the present day she is released by Jack Spicer, the self proclaimed evil boy genius. She promises him power and wealth to convince him to search out the Shen Gong Wu to restore her to full power and conquer the world. After collecting enough Shen Gong Wu to combine with the Heart of Jong, Wuya has Jack Spicer assemble Mala Mala Jong as his replacement. They attack the Xiaolin Temple defeating the monks, including Master Fung. Omi defeats Mala Mala Jong with the Golden Tiger Claws, leaving Wuya without an ally.

After the incident with Mala Mala Jong, Raimundo Pedrosa feels furious that he was the only one not promoted to Xiaolin Apprentice. Wuya seizes the opportunity to recruit a new accomplice. He wins the Reversing Mirror on her behalf. She then convinces him to steal the Serpent's Tail. They combine the two Shen Gong Wu to restore her to her former power, which she uses to claim victory over the three Xiaolin monks. But when she had almost succeeded in taking over the world alongside Raimundo, until Raimundo betrayed her and she was sealed back in a certain puzzle box in her ghostly form once again.

She later had a short partnership with a thief named Katnappé, but she returned to Jack.

Now, Wuya is partnered with Chase Young, the "master of evil", who turned her back to her normal form. Wuya, however, eventually grew to dislike the partnership, especially since he had denied her the vast majority of her powers, and plotted against Chase Young. Naturally, Chase learned of her plot, and defeated her after she gained the Rio Reverso. Eventually the both reconciled and decided that they will be continue working together.

In her ghost form, Wuya is often cranky, though the extent of this is different from season to season (in season 1 she was very impatient and often yelled to Jack, while in season 2 she was nicer to him, because she understood that she needs him, but she still complained to him when he was doing something stupid). In her human form, Wuya is much more calm and decisive. She seems to fear Dojo's escape from his box with such intensity that she feared he would end the world. Despite her evil and malevolent ways, Wuya sticks to her word, giving Raimundo everything he asked for.

She seemed to act like a devil-conscience, or big sister to Raimundo while they were allied and generally seemed to like him. She banters with Dojo Kanojo Cho at times, though generally seems to disregard his existence. She seems to have a sort of mutual respect with the ancient monk Grand Master Dashi who imprisoned her, and she briefly comments that he was "a fool...a smart dresser... but a fool." She does not seem to regard any of the other monks in any way. Wuya also served as a type of roommate and gun moll to Chase Young when both live together in Chase's citadel. Wuya often uses her feminine wiles to try and get Shen Gong Wu from Chase. Wuya was often treated like a second-class citizen in Chase's citadel, resulting in some bad blood between the pair. The third season was when Wuya got payback on Jack for failing her all those times. Rather than pleading with him or ordering him to help her. She would threaten Jack and beat him around to get him to do what she wanted him to do.

Wuya is very vampirsh in appearance and has some very animalistic features, including large claw-like hands, fang-like teeth, and pointed ears. While in the first episode, Wuya was seen with purple 'hair'; in all of her later appearances, Wuya has big, long red hair with a few flip in it. Her eyes are stormy bright green.

Wuya in her human form generally wears a black female monk's uniform with a purple outline and a red sash with no footwear and on tiptoe almost always. In "Treasure of the Blind Swordsman" Wuya wore a flairy black cowgirl outfit and hat. In Raimundo's dream sequence in "The Dream Stalker," she was wearing a pink kimono almost identical to the one Kimiko had been wearing during "Tangled Web". The 'Good Wuya' featured in "The Life and Times of Hannibal Roy Bean" wears a white robe instead of a black one, and in "Time After Time: Part 1" for a brief moment she is seen dressed as a cheerleader.

Wuya's ghost form looks very similar to an octopus; a disembodied floating head with many tentacles that resemble hair. She also is constantly masked in this form. She flashes and sparks when a Shen Gong Wu is located or when she is emotional.

In "The Journey of a Thousand Miles" Wuya's ghost-form is slightly different from the way it appears during the rest of the series. For one thing, her mask cannot move while in later appearances it seems to animate as if it were her face (this was likely for animating purposes, to show Wuya's emotions more effectively). She is also significantly larger.

Wuya is commonly referred to as an old hag due to her age and appearance as a spirit. While still referred to as a hag, in her human form Wuya is actually youthful and extremely attractive. As she has not physically aged in the episode "Time After Time" (which takes place eighty years into the future) it can be assumed that she is essentially immortal. 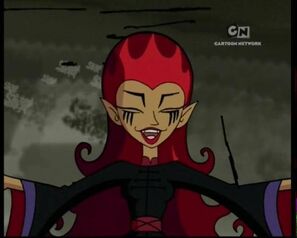 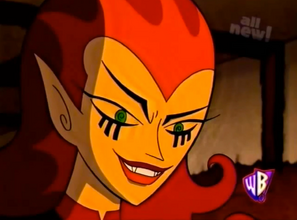 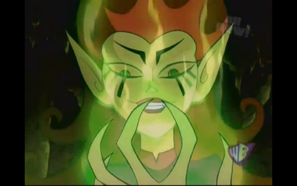 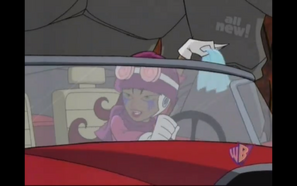 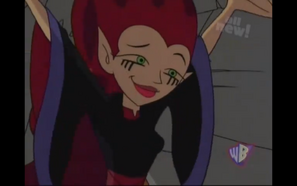 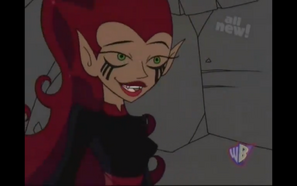 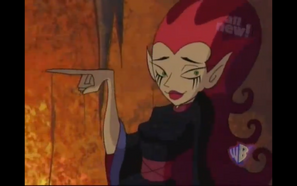 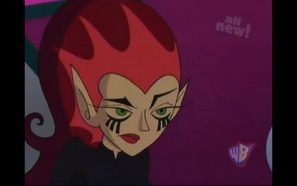 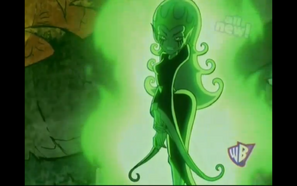 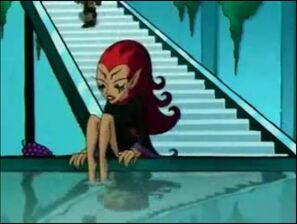 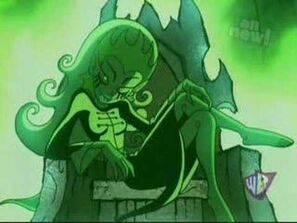 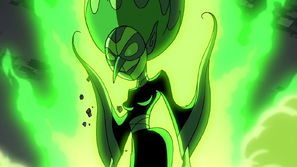 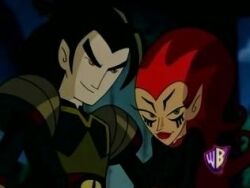 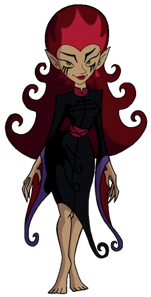 Wuya's human form
Add a photo to this gallery

Retrieved from "https://villains.fandom.com/wiki/Wuya?oldid=4270271"
Community content is available under CC-BY-SA unless otherwise noted.