Monkey (by Barbo and Guts)

Leader of the Black Dog Knights

Kill the Band of the Hawk.

Save himself by activating the Crimson Beherit from Griffith.

Wyald is a major antagonist of the Golden Age Arc in the Berserk series. He was an Apostle who was the leader of the Black Dog Knights.

He was voiced by Kunihiro Kawamoto.

Little is specifically known about Wyald's life before he became an apostle though at some point after becoming an apostle he was taken prisoner by the Midland army. During his imprisonment, the King of Midland ordered all prisoners to be assembled and drafted into war in revenge due to Griffith's escape. Wyald volunteered as leader of the army claiming to be the strongest of them all. However, an enormous man named Barbo approached Wyald and challenge him to a fight to the death. In order to earn the fear and respect of the other convicts, Wyald killed him by impaling him on the spike of a tower. Wyald and his army of convicts then named themselves the "Black Dog Knights" which was known for being the cruelest army in all of Midland due to their horrific crimes.

When the band of the Hawk rescued Griffith and escaped the Midland forces, the King ordered the Black Dog Knights to hunt them down and kill them. In pursuit of the Hawks, Wyald's group comes across a farm that previously aided the Hawks, The Black Dogs then killed the residents and raped the women. When the Wyald and his army confronted the Hawks, they were attacked by many of the Hawks' traps, with only Wyald and several of his men continued to pursue which eventually causes Wyald to battle against Guts.

After realizing his men were outmatched, and killing them when wanting to abandon the battle, Wyald decided to assume his true form. After a long and brutal fight against Guts, Wyald is critically wounded and was presumably dead with the scouts guarding the corpse. However, Wyald regains consciousness and kills the scouts before taking Griffith hostage, wanting to start the Eclipse early in order to save his own life. After stripping Griffith from his bandages down to reveal the full extent of the torture inflicted upon him, Wyald worries on where Griffith's Beherit is. He is then ambushed by Nosferatu Zodd who then impaled him from the back with his horns, wanting to make sure that Griffith arrives at the destined time and place of the Eclipse. Wyald then begs for mercy, saying that he was simply following the God Hand's one law of "Do as thou wilt". Zodd however dismisses the claim and rips his stomach open. Now dead, Wyald's spiritual essence is dragged into the Abyss by his many victims while his body is reduced to that of the old man he used to be.

Wyald was an aggressive and violent brute who was defined by his motto of "Enjoyment and Excitement", which translated to causing as much harm to others as he pleased. He possessed an unrelenting bloodlust that led him to torture and kill those who crossed his path with an almost childlike glee. His men fared little better, as Wyald was quick to kill them for the slightest of offenses, or even for simple amusement, invoking a deep fear in them. In addition to all of this, Wyald was also misogynistic and sexually sadistic, having raped countless women from the many villages he raided.

Despite his complete disregard for the wellbeing of others, Wyald proved to be very cowardly when faced with the prospect of his mortality, proven when he pathetically begged for Zodd to spare his life, moments before being killed by him. 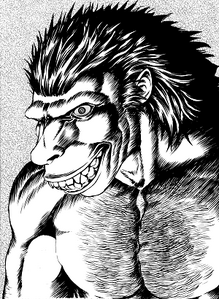 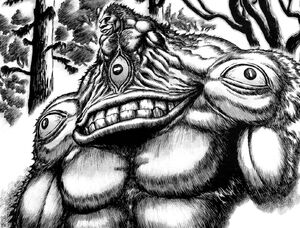 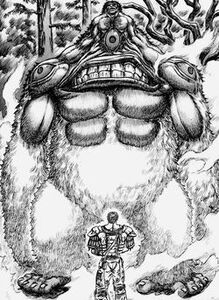 Wyald standing before Guts in his apostle form. 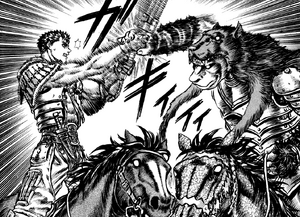