Wyatt is the crazy ex-boyfriend of Noelle Samuels and a minor, but central antagonist of the horror anthology TV series Slasher. He appears in Season 3 and is revealed as the original Druid who killed Kit Jennings.

He is portrayed by Jefferson Brown.

In Clayborne, Virginia, Wyatt dated a girl named Noelle Samuels. Noelle eventually broke it off because she found Wyatt was too controlling and a little crazy. But, Wyatt was not over Noelle and stalked her constantly. One night during the Summer Solstice, Noelle met a bisexual and very promiscuous man named Kit Jennings and the two shared a kiss. Noelle posted a photo of the kiss online, and Wyatt, who was stalking Noelle's social media, saw the photo and became jealous and enraged. Wyatt dressed in a costume that blended in with the various costumes and masks people had been wearing for Solstice, and waited for Kit Jennings to return to his apartment.

Once Kit addressed him, Wyatt pulled out a kitchen knife and chased Kit around the building, stabbing him a couple times with the knife. The chase was cut off abruptly when Kit fled into the road and was hit by a car. Wyatt disappeared as people gathered around the crime scene. Although, he was questioned by authorities and was the prime suspect, police could never get the proof that Wyatt was the murderer. One year later during the Summer Solstice, Wyatt's crime would go on to inspire serial killing copycats. During the brutal murders committed by the copycats, Wyatt donned his costume again and murdered Noelle while she was attending a memorial for Kit. 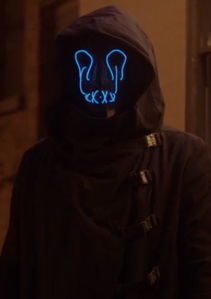 Wyatt as The Druid. 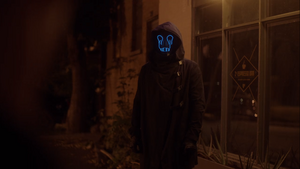 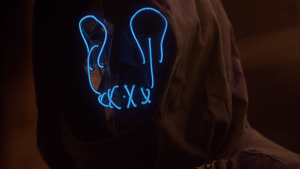 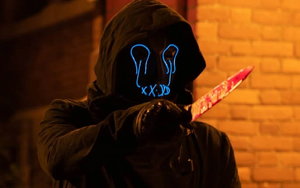 The Druid.
Add a photo to this gallery

Retrieved from "https://villains.fandom.com/wiki/Wyatt_(Slasher)?oldid=3634136"
Community content is available under CC-BY-SA unless otherwise noted.