Villains Wiki
Register
Don't have an account?
Sign In
Advertisement
in: Food, Partners in Crime, Redeemed,
and 24 more

Wynnchel and Duncan are the secondary antagonists in Disney's 52nd full-length animated feature film Wreck-It Ralph and minor characters in its 2018 sequel Ralph Breaks the Internet. They're two doughnut cops who serve as King Candy's two henchmen who are a part of the official Security Team of the arcade video game, Sugar Rush. Neither of them are very bright, but nevertheless, they still try to keep order within Sugar Rush.

Though neither of them are very bright, it is nevertheless their task to keep order within Sugar Rush, which includes keeping intruders out of their game. Both Wynnchel and Duncan appear to value their jobs greatly, evidenced by their dedication in pursuing Ralph and Vanellope in the film, as well as stopping speeders in the tie-in comic "The Donut Kart".

However, they are clearly inept at upholding the law, being both naive, cowardly, and simple-minded. They don't hold back on harassing Ralph when he is trapped in a cupcake, suggesting they are quick to violence and overzealous in their duties; the film and other media also depicts them as hotheaded and irresponsible. By being associated with King Candy, they also represent the stereotype of corrupt police officers.

Wynnchel is a tall and slender éclair (also called a "long john") with brown frosting. Duncan is a shorter and stockier traditional donut with white frosting and a mustache made from chocolate sprinkles. Both have bulbous red frosting noses, and wear uniforms consisting of a police cap, sunglasses, utility belts, and black leather gloves and boots. Their badges are shaped like a five-pointed star with a pink donut in the center.

When Vanellope von Schweetz, a young girl who was banned from racing in Sugar Rush because she's a glitch, weasels her way into the Random Roster Race, Wynnchel and Duncan are called fourth to arrest her, but a taffy monster interferes and scares the donuts away. The distraction allows Vanellope to escape, while the taffy monster gets itself stuck in a giant cupcake, allowing Wynnchel and Duncan to capture it and take it to King Candy. There, the monster is revealed to be Wreck-It Ralph, who was looking for his medal that Vanellope stole.

King Candy tells him that it's impossible to retrieve his medal because she deposited it in the codes along with the other gold coins, which now allows her to race. Wynnchel and Duncan are then ordered to escort Ralph out of Sugar Rush, but Ralph escapes and searches for racers to win back his medal. Later on, Wynnchel, Duncan, and King Candy head to the kart factory where Vanellope and Ralph have broken in to make a kart. On their motorcycles, Wynnchel and Duncan chase Ralph and Vanellope down but they lose them.

King Candy orders the duo to continue searching, but after a while, Wynnchel and Duncan return to the castle to inform the king that they've failed and King Candy ordered them to leave.

Later on, Duncan can be spotted escaping Sugar Rush during the Cy-Bug invasion caused by Ralph accidentally bringing a Cy-Bug from Hero's Duty into Sugar Rush. Thanks to Ralph, the Cy-Bugs were defeated, as was King Candy, who turned out to be a rogue video game character who dominated Sugar Rush, dethroning Vanellope who is the game's true ruler. Fortunately, Vanellope is revealed to be the "Princess of Sugar Rush", but decides to make herself president instead. After the truth was revealed, Wynnchel and Duncan apologized to Vanellope and gladly became her security guards.

Wynnchel and Duncan then have a final appearance during the end-credits sequence; apparently participating in game-jumping adventures like the lead characters, the duo is glimpsed running from Cyril the Zombie (with a few more zombies) chasing them.

6 years, ever since the events of the film, Wynnchel and Duncan enjoys time in Sugar Rush, but when the game was unplugged, they evacuated and hits the security. Then they sob for the loss of their game. 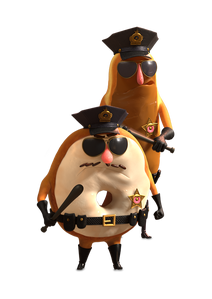 Wynnchel and Duncan brings in Ralph

Duncan with a chainsaw

Wynnchel and Duncan arriving at the kart bakery with King Candy.

Wynnchel and Duncan surprised to see Ralph helping Vanellope get a kart.

Wynnchel and Duncan seeing that Ralph and Vanellope have disappeared.

Wynnchel, Duncan, and King Candy confused to where Ralph and Vanellope disappeared to.

Wynnchel and Duncan ordered by King Candy to find Ralph and Vanellope.

Wynnchel and Duncan goes to the palace

Wynnchel and Duncan comes in to the throne room

Wynnchel and Duncan nod 'no' in dismay

Wynnchel and Duncan fleeing in the end credits