Wyzen of the Seven Deities

Member of the Eight Generals (formerly)

One of the Seven Deities

Aid Deus with his goals.

Wyzen is one of the Seven Deities, and a major antagonist in the video game Asura's Wrath.

He was voiced by Cafurin in the Japanese version and Brad Grusnick.

Before Asura is betrayed, Wyzen first appears alongside Sergei and Kalrow and tries to persuade Asura into Deus's cause but he refuses.

Later he appears aiding him alongside Yasha and Augus during the battle against the Gohma fleet above the planet, Gaea. Following after the victory against the Gohma, he then found out about the Emperor's death due to being "murdered" by Asura. He quickly deemed him a 'traitorous filth' upon cornering him.

12,000 years after Asura was killed by Deus, Wyzen became one of the members of the Seven Deities. As Asura was wandering a village worshiping the Demi-Gods, an army of Gohmas appeared and attacked the village.

Shortly after that, Wyzen's army showed by and killed the remaining Gohma. However, Wyzen spotted Asura in the village and processed to engage him in combat. The fight didn't last very long as Asura's rage granted him the power to defeat Wyzen.

But Wyzen didn't accept his defeat and decides to transform into a giant form of himself known as Vajra Wyzen. Wyzen told Asura that it was Mithra's power that granted him this amount of power. With his new power, Wyzem fought Asura in the sky and on the ground. Asura had to defend himself as Wyzen's powers went on another level. The energy projectiles shot by Wyzen caused Asura to go from defense into offense, so Asura attacked Wyzen with everything that he had. After a long battle, Wyzen managed to crush Asura. It seemed that Wyzen defeated Asura, until Asura entered into his Six-Armed Vajra form.

Wyzen was losing his advantage and attempted to attack Asura again, both their fists hitting against each other in the sky. However, Asura was able to hit Wyzen's huge body with such force, that Wyzen was shot into the atmosphere.

Asura had defeated Wyzen, at least it seemed so. Wyzen, floating over Gaia, unleashed his full power and transformed into Gongen Wyzen, his most powerful form, which was as huge as Gaia itself.

Using only his finger, Wyzen tried to crush Asura. Full of Rage, Asura collected all his power and stopped Wyzen's finger. Then he processed to use all six of his arms and punched with immense speed against Wyzen's fingertip.

In the process Asura lost five of his six arms. With a last bit of strength, Asura, at the cost of his sixth arm, managed to deliver a punch, which was filled with Asura's rage and strength, causing Gongen Wyzen's fingertip to implode. This caused a chain reaction which slowly destroyed Wyzen's body. Shocked, Wyzen could only watch as his body was completely destroyed.

Wyzen is loyal as well as cocky and arrogant which tends to get the best of him in battle. This is shown when he taunted Asura incessantly and showed off his powers at the cost of underestimating his opponent. He takes great pride in his status as a god and flaunts it towards others at any given opportunity. He is known for being incredibly dramatic and loves to strike extravagant poses to others to emphasize his greatness. He also appears to lack a degree of common sense and intelligence as he casually wasted a vast amount of mantra the Seven Deities had collected for the Great Rebirth in a final attempt to defeat Asura, causing Kalrow to call him a idiot. Wyzen is also the most prejudiced of the Seven Deities, as he greatly sees humans to be greatly inferior beings to himself and his kind.

As a Demi-God, Wyzen wields superhuman abilities and immortality. He also wields Superhuman strength, durability, and endurance, since he's considered to be the muscles of the Seven Deities. He right arm wields a giant golden arm that can shoot missiles. Wyzen also has the ability to change forms by absorbing mantra. The first form, known as; Vajra Wyzen increases his size, strength, and even speed. In his second form, known as; Gongen Wyzen, greatly increases his size and strength. In this form, Wyzen large in size, rivaling the size of Gaea. 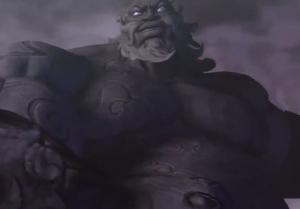 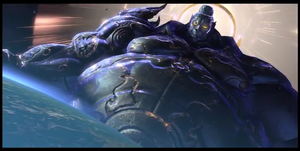 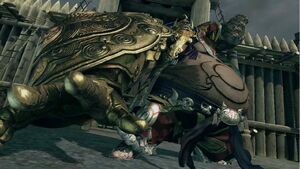 Wyzen about to confront Asura. 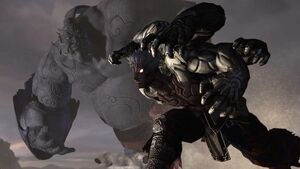 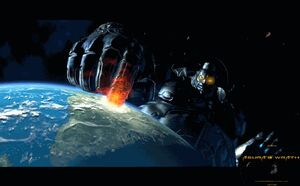 Gongen Wyzen about to crush Asura. 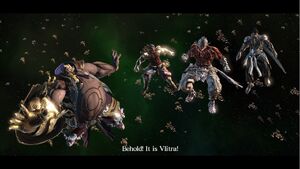 Wyzen along with Asura, Augus, and Yasha fighting the Gohmas.